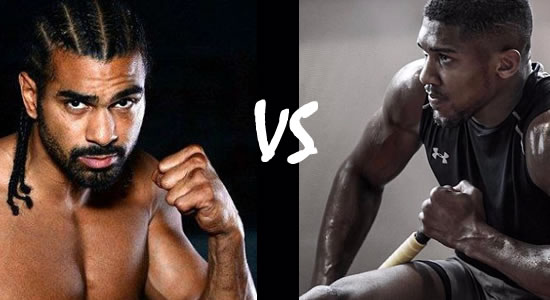 British Professional Boxer, David Haye said he wants to face reigning World Heavyweight Champion Anthony Joshua in 2018 in the "biggest fight ever on the UK soil." Haye who is recovering from an achille injury that contributed to his defeat to Tony Bellew in March 2017 hinted that negotiations were still ongoing for a rematch in December. He enthused that if Bellwe was knocked out by December, the next target would be Joshua. He said the fight would be the biggest in UK history.

According to him "The plan is (to return) before the end of the year. That's what I've said since I had my operation. That's what I believe will happen. There are a few names bouncing around but I'll probably know in the next couple of weeks. (A rematch with Bellew) might happen but only if we can get on the same page".

"We have always been on different pages. I won't be holding my breath for that one. If it's supposed to happen it will happen but at the moment I wouldn't put money on it. If I can have two fights back and work my way up the rankings, then it will be up to Joshua to give the fans one of the biggest fights ever in the UK."

He hinted that all that was required for the fight with Joshua to happen was for him to win the next four fights.

"Four fights, maximum. I believe I can work my way up the rankings and get the right fight with the right guys. Number one in my eyes is Anthony Joshua. Joshua has some business to take care of with (Kubrat) Pulev but then next year, in an ideal world, I'll fight Anthony Joshua"
"At the moment, I'm not on his radar because I lost my last fight. He's worried about his mandatory challenger, not me, understandably. He knows he is my target; he's everybody's target because he is considered number one. If you want to claim you're the best in the world in the heavyweight division, you have to go through Anthony Joshua and do something nobody has ever done before."

"I love that challenge, I love the fact that he's 10 years younger than me and three stone heavier than me, three inches taller. That for me is a challenge and a challenge that 90 per cent of the population don't think I've got a chance with. Next year, if I can win a couple of fights and he keeps his titles, we can both take on each other in the biggest fight ever on UK soil."