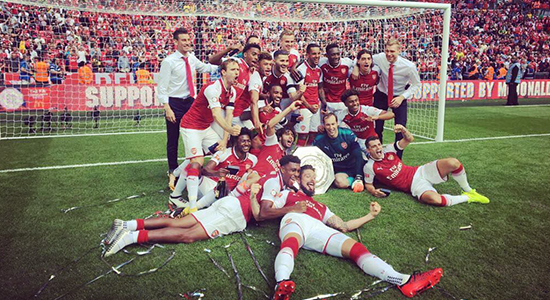 Arsenal on Sunday won the Community Shield on penalties after Thibaut Courtois and Alvaro Morata missed in the shootout. Arsenal new boy, Sead Kolasinac had struck a late equalizer to take the seasonal curtain-raiser to spot-kicks after Victor Moses had looked set to gain revenge for 10-man Chelsea’s FA Cup Final defeat in May.

The Nigeria wing-back sent off three months ago, rammed the ball home a minute into the second half after Arsenal failed to clear a corner.

But Kolasinac, signed on a free transfer from Schalke, headed home with eight minutes left after Pedro was sent off for a foul on Mohamed Elneny.

With no extra-time and the new ABBA penalty format in place, Olivier Giroud scored the winning spot-kick.

Midfielder Granit Xhaka forced a superb save from Chelsea keeper Thibaut Courtois deep into the second half.

Wenger, meanwhile, was forced to take off defender Per Mertesacker after just 32 minutes. The German was left clutching a bloodied face following a clash with Gary Cahill as both players went to head the ball.