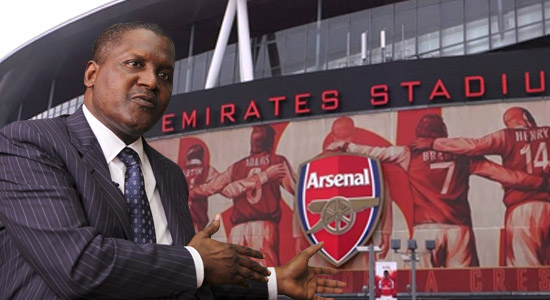 President of the Dangote Group, Alhaji Aliko Dangote, has said he would sack Arsene Wenger if he succeeds in acquiring Arsenal Football Club. Dangote, who made the assertion while featuring on an interview with Bloomberg, said his desire to own the club dates back to the mid-1980s.

The richest man in Africa noted that he would consider making an offer once the construction of his $11 billion oil refinery in Lagos is completed.

But Dangote expressed optimism of persuading Kroenke and Usmanov to sell their shares to him.

He said: “The first thing I would change is the coach. He has done a good job, but someone else should also try his luck.

“If they get the right offer, I’m sure they would walk away. Someone will give them an offer that will make them seriously consider walking away. And when we finish the refinery, I think we will be in a position to do that.”

Wenger, who was appointed the Manager of the club in 1996, has remained at the club wining three Premier League titles and seven FA Cup trophies.