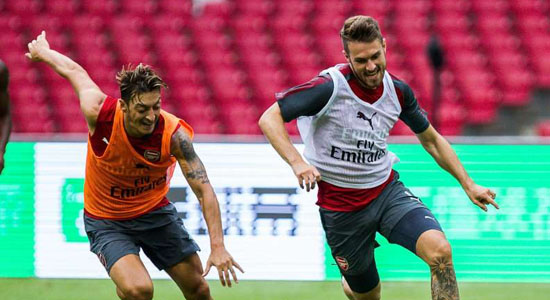 Arsenal manager Arsene Wenger, says Mezut Ozil and Aaron Ramsey are unlikely to be fit for their first league game of the season.  However, SportsMail that Per Mertesacker will be fit for the game after suffering a nasty cut to the head when caught by an accidental elbow from Gary Cahill during the Community Shield win over Chelsea.

Ozil missed the Community Shield game after picking up a knock in training and Wenger said the German playmaker has a swollen ankle and thus 'has little chance to play on Friday night'.

Ramsey also suffers from a minor calf injury and will not be available for the visit of the Foxes.

New arrivals Alexander Lacazette and Sead Kolasinac got high praises from the manager although Wenger reckons they need more time to settle into the English game.

'They looked like they adapt very quickly. Lacazette is getting better every week, Sead was very strong last week and when he came on again he played very well.'