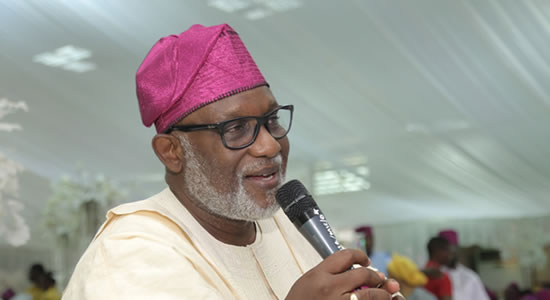 The Governor of Ondo state, Rotimi Akeredolu has called on President Muhammadu Buhari to sack the Acting Chairman of the Economic and Financial Commission (EFCC) and replace him with a more competent and generally acceptable candidate. The Governor who made the call when he featured on a radio programme anchored on Saturday by Fresh FM Ibadan stated that his position was based on his rejection by the Senate.

According to him “... my take on this is: If the Senate did not need to clear him, why was his name sent there in the first instance? The Presidency must clear the air on that. Then the argument changed that his clearance is in the EFCC Act and not in the constitution. But it is there.Is the Act in conflict with the constitution? If it is not, then you have to apply it. It is a gray area for now and needs the imprimatur of the Supreme Court to decide where we go from there.

The Supreme Court can ask the question: Have you had an EFCC chairman who was not cleared by the Senate? That can be raised. It can say then we have established a convention that he must be cleared. The clearance is provided for in the EFCC Act and so why don’t we go by it?"

“The Supreme Court can also explain if the provision in the EFCC Act is in conflict with the constitution it will explain how that happens. We have wonderful Judges everywhere and the way we give interpretation is different. It may be subjective For me, I know what I believe. I don’t see any reason for instance why the clearance must not be sought. If the Senate decides it will not clear Magu, then the Presidency should pick another person,” he added.