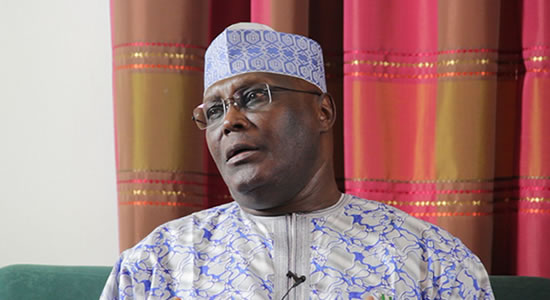 The recent Presidential Candidate for the Peoples Democratic Party (PDP) in the 2019 general election, Alhaji Atiku Abubakar, has insisted that he or any of his family member did not in any way breached any law and are not under any surveillance of the United State contrary to the rumor making round. Prior to the 2019 general election, there were reports that the Financial Crimes Enforcement Network (FinCEN), an agency of the United States Department of Treasury, was alleged to have placed Atiku and his family under the surveillance.

However, in reaction to the statement today, Atiku’s Special Adviser on Media, Paul Ibe revealed that “these are recycled false allegation”

He disclosed that the rumor was concocted to divert the attention of Nigerians from the recent statement by the Secretary to the States of the US, Mike Pompeo, when he announced a travel restriction against some individuals who are yet to be identified.

In his statement which partly reads, “My attention has been drawn to recycled and regurgitated lies about the person of Atiku Abubakar.

“For the avoidance of doubt, Atiku Abubakar is not under any US watch list, neither has he been charged, or will ever be charged by the United States Justice Department or any other in a foreign jurisdiction.

“It will be recalled that these recycled lies were re-unearthed just before the February 23, 2019, presidential election, and to put paid to them, His Excellency, Atiku Abubakar, applied for and received a US visa, whereupon he embarked on a visit to the United States on January 17, 2019.

“He stayed in a hotel a few miles to the United States Department of Justice.

“Atiku Abubakar, in the course of that trip, was also received in audience by officials of the United States Government.

“Moreover, the timing of this report, less than 24 hours after the Edo state gubernatorial elections, should give some thought to thinking people.

“And considering the season that we are in, more of such jaundiced stories seeking to discredit Atiku Abubakar would come.

He reiterated that the former vice president has a clean bill with the United States Department of Justice and has nothing to answer to the government of the US or any foreign government law.

According to a report by an online medium, PREMIUM TIMES, new Findings showed that FinCEN flagged some transactions linked to the senior politician.

As suspicious as surveillance of money movements within the international financial system is being monitored.

The new pointer according to the report indicates a fresh lead into how a large chunk of money transfer was linked to Atiku Abubakar which has crossed international jurisdiction company laundered by a shell company.

The report added, FinCEN files, a new investigation by the International Consortium of Investigative Journalists, BuzzFeed, and 108 media partners across the world, including PREMIUM TIMES, are a large volume of confidential financial reports relating to the transaction activities of world leaders, terrorists, drug dealers, and money launderers.

The investigation is said to have involved 16-month collaborative work involving more than 400 journalists, including those from PREMIUM TIMES, in 88 countries.