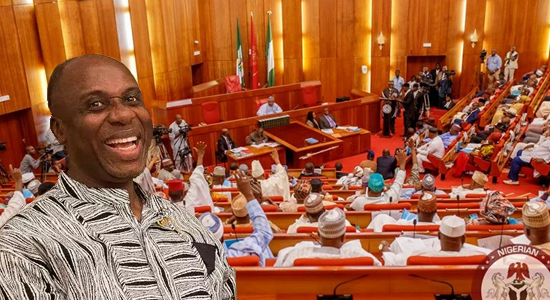 President Muhammadu Buhari’s request for the National Assembly’s endorsement of a $5.815 billion loan suffered a temporary setback yesterday at the Senate. The Federal Government plans to raise the loan from the China Exim Bank to modernise Lagos-Kano, Kano-Kaduna, Lagos-Ibadan and Lagos-Calabar rail lines.

Following a motion by Senator Enyinnaya Abaribe (Abia South), the Senate resolved to invite Minister of Transportation Rotimi Amaechi to explain why the South East corridor rail line was omitted in the areas covered by the proposed loan.

The upper chamber, however, rejected a prayer that urged the Senate to suspend consideration of the loan request pending when the “oversight” of the eastern part of the country is corrected. The motion entitled “Outright Omission of Eastern Corridor Rail Line in the request for approval of Federal Government 2016-2015 External Borrowing (Rolling Plan)” was hotly debated.

Abaribe recalled that on 26th of April, 2017 the Federal Government laid before the National Assembly a request seeking an approval for a loan of $5,851 billion from China Exim Bank to execute the modernization of Lagos-Kano, Kano-Kaduna, Lagos-Ibadan and Lagos-Calabar rail segment;

He noted that the loan being a Federal Government borrowing, would be paid for by all sections of the country; therefore every section of the country should be taken into consideration;
To Abaribe, the complete exclusion of the Eastern section that links the four zones of South-South, South-East, North-Central and North-East and the key cities, such as Port Harcourt, Aba, Enugu, Makurdi, Lafia, Gudi, Jos, Bauchi and Maiduguri, is inexplicable,

He prayed the Senate to suspend consideration of the loan request until the correction of the oversight is made. He also urged that Senate to invite the Minister of Transport to explain the exclusion.

He noted that the promise of the government that the rail line in the South East would be accommodated in future was doubtful. But Senator Gbenga Ashafa, (Lagos East) described the information in the motion as “inadequate and inaccurate”.
Ashafa, who is also Chairman, Senate Committee on Land Transport, said that the Lagos-Kano and Lagos-Calabar rail lines covered the areas listed in the motion.

He said that Onitsha and Aba are also covered in the plan. He urged the Senate to look at the issue dispassionately insisting that the loan should be secured for the development of the country.

Saraki said if the report of the Senate Committee on Local and Foreign Debts failed to cover the South East, the Senate would resolve how to deal with the loan.