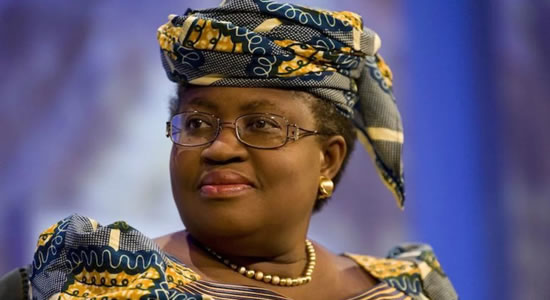 Ngozi Okonjo-Iweala’s Chance At WTO Race Gets A Boost

The chance for Nigeria’s candidate in the World Trade Organization race, Ngozi Okonjo-Iweala, to become the WTO DG has received a boost as information reveals that South Korea has decided to withdraw its candidate, Myung-hee. Okonjo-Iweala had secured the popular vote by a wide margin on October 28 but was not named DG because the US opposed her candidacy. Myung-hee is South Korea’s Trade Minister and its candidate for the job at the WTO following the resignation of Roberto Azevedo.

Earlier on Washington Trade Daily (WTD) quoted persons familiar with the development to have disclosed That South Korea was expected to announce its decision to withdraw Myung-hee in the coming days to enable WTO’s General Council appoint Okonjo-Iweala.

The Washington-based news medium further revealed that South Korea had already communicated its decision to the United States, which had been insisting on the selection of Myung-hee.

The WTO initially scheduled a General Council meeting for November 9, but was rescheduled by Geneva Canton following new restrictions imposed due to surge in Covid-19 cases. A new meeting which will be held virtually as usual has been scheduled for December 17, but it is unclear whether the meeting can take place if the current restrictions continue next month.