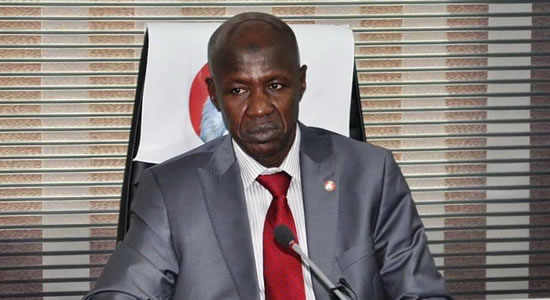 Members of Coalition of Nigerian Youths for Change Initiative have called on the Acting President, Prof Yemi Osinbajo to remove the Acting Chairman of the Economic and Financial Crime Commission (EFCC) from office over his alleged indictment by Air Commodore Mohammed Umar's revelation that he was fronting for Magu in the arms deal scandal.

The group made the call in a statement signed by the National Coordinator of the Group, Oladimeji Ayo. The statement maintained that for Umar Rtd to have awarded a contract worth N43 million for the furnishing of Magu's apartment which was rented at the cost of N40 million when the country is in economic difficulties was enough to relieve Magu of his appointment.

The statement reads in full;

“Magu led EFCC is not different from his predecessor, Ibrahim Larmorde whose tenure witnessed the outright stealing of N1trillion Naira of recovered funds by the commission, an allegation that made Mr Lamorde disappeared from public scene instead of defending himself before the Nigerian Senate. The way and manner Ibrahim Magu is handling the operation of the commission where EFCC has become more powerful than the Nigeria law court has raised suspicion among Nigerians.

This is an era of Anti corruption crusade where we are expected to witness the liberation of the Nigerian State, where we expect all Nigerians to support Mr President in restoring dignity and sanctity to the people, where the rule of law is supreme as preached by Mr Magu upon resumption as the Chairman of the commission, but today, Mr Magu as the head of EFCC is playing the script of some powerful persons by collecting money in dollars thereby setting them free, while those legitimately set free by the law court are being held to ransom".

Look at the forwarding of Magu’s name for confirmation, immediately Mr President travelled to London, some persons prevailed on the Vice President and Magu’s name was forwarded to the Senate for confirmation. This shows that Magu’s loyalty is not for Mr. President. We hereby call on President Muhammadu Buhari not to sweep under the carpet, the revelation by Thisday Newspaper of the 10th of June, 2016 that Mohammed Umar who was a member of the Presidential Arms procurement probe panel that the $1.5 million recovered from him is for a ranking member of the panel from EFCC which Magu is the only representative of EFCC in the panel.

This is a verifiable report and it's still happening. It is high time we call a spade a spade by bringing to book those with corruption tendencies that could damage the good image of Mr President and his administration. Mr President has a divine mandate to rescue the country, with his wisdom, our economy is being diversified.

For the first time since the exploration of crude oil in Nigeria that, we have a founded budget of over 600 billion Naira with 20 percent contribution from the sale of crude oil. It is amazing, it shows we are moving forward, but with some people like Mr. Magu as the head of our Anti Corruption Agency, we shall move nowhere.” he said.