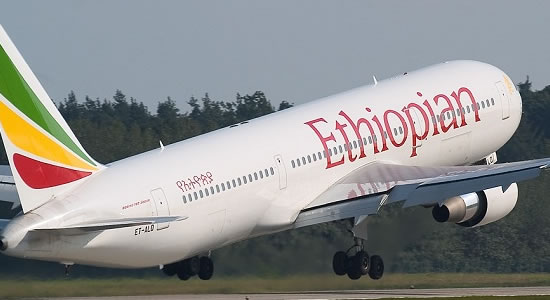 Ethiopian Airlines on Tuesday commenced flight operations to Kaduna with Boeing 737-800 aircraft, which landed at the Kaduna International Airport from Addis Ababa at noon carrying 17 passengers on board. Guardian news reports that the flight with registration number ET-9221, also departed for Addis Ababa at 1:30 p.m. with 10 officials of Kaduna State Government on board and other passengers.

Speaking before departure of the aircraft, Governor Nasir EI’ Rufai said Kaduna State had hitherto been disadvantaged in terms of access to the outside world.


The governor said the state had no access to the sea, as well as a lack of international flight into the state until the Nnamdi Azikiwe International Airport, Abuja was shut for rehabilitation of its runway in March.

He said that with the inaugural flight, the airport had become a full fledged and this would enable people of the state to connect with over 100 destinations using the airline.

According to him, Ethiopian Airlines is the only international airline that has indicated confidence in Kaduna by deciding to fly the route.

“This is a very happy day for me and all of us in the Kaduna State because when we came into office we recognised that Kaduna has two disadvantages.

“So, our business men and residents have to go to Lagos for access to the sea or go to Abuja or other destinations to board international flights.

“We decided that we had to work round the clock to remove those disadvantages. I’m happy to say today that with this inaugural international flight out of Kaduna, we have broken the ice,” he said.

The governor assured the management of the carrier that the state government would fully support the airline in order to make the route viable and sustainable.

“We are going on this inaugural flight along with 10 representatives of the Kaduna State Government to spend two or three nights in Addis and come back because we want to show the airline how grateful we are that this has started,” he said.

Earlier, the Ethiopian Ambassador to Nigeria, Samoa Zakaria, said the airline had always been with Nigeria in good and bad times.

Zakaria said that Kaduna was their fifth destination in Nigeria, adding that it operates five destinations in only two countries, China and Nigeria.

He said that the airline was willing to begin operations to any destination, adding that Ethiopia recognised the big brother role being played by Nigeria in Africa.