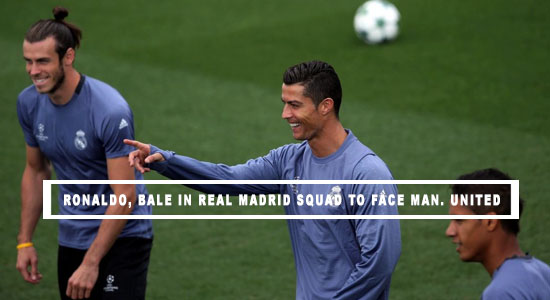 Cristiano Ronaldo has been included in the Real Madrid squad to face Manchester United in UEFA Super Cup clash in Macedonia on Tuesday. The FIFA Player of the Year had been a doubt for the match having missed most of the Champions League winners' pre-season campaign.
Ronaldo captained Portugal to the FIFA Confederations Cup in Russia in July and was given an extended break.

But he has returned to training and is now considered in good enough shape to face his former club, who won last season's UEFA Europa League.

Also included in Real Madrid's 24-man squad is Gareth Bale, who has had fitness issues and has been linked to a United move.

Real regulars Sergio Ramos, Luka Modric, Toni Kroos, Karim Benzema and Kaylor Navas are all in the squad, as well as some youngsters.