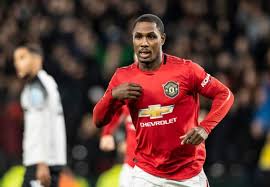 Odion Ighalo has affirmed his stance of wanting to remain with the Manchester United even after his loan deal with the Man Utd expires.

The Nigerian striker moved to Old Trafford from Shanghai Shenhua on a six months contract since January.

Ighalo pushes his way to impress the United, after netting four times in all competitions for the Red Devils.

The United Manager, Solskjaer has expressed readiness to work with Ighalo who was brought in following back injury Marcus Rashford suffered.

Meanwhile, Ighalo contract is set to expire on May 31st, which means the Red Devils might likely lose him either during or after the start of the rescheduled end to the currently suspended Premier League campaign.

The Shanghai is determined to cling onto the Nigerian striker and have made him a mouth-watering offer of £15 million, while also offering him £400,000 a-week to convince him to turn down the united.

However, when a fan asked Ighalo if he was ready to remain with the united if he was offered a contract extension during a question and answer on twitter on Friday, he replied: