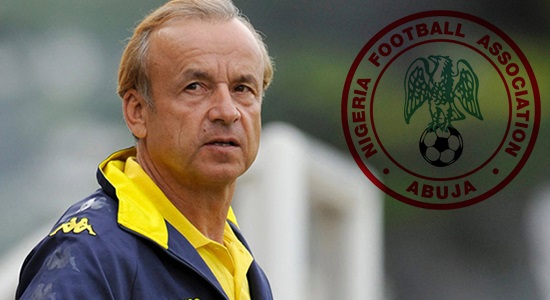 The Nigerian Super Eagle coach, Gernot Rohr, has expressed dissatisfaction over decision of, Amaju Pinnick, the President of the Nigeria Football Federation, NFF for manipulating Cyriel Dessers to shift allegiance to Nigeria. Sports Extra Reports reported that Dessers switched allegiance to Nigeria to participate in playing for Eagle at senior level despite been eligible to play for Belgium last month.

ESPN revealed that a close source cited the case of Queens Park Rangers’ Eberechi Eze, who was approached by Pinnick to do same and reported by media, but the player refused to make up his mind immediately to move to Eagle.

He disclosed there are more influential people who may not be happy with him if he switches his allegiance, this was the reason he had to rethink over the matter and discussed it with confidentiality.

Eze has a Premier League team looking for him, and a championship team with promotion prospect too, saying by posing with Pinnick on a picture would compromise that move.

“There are over 450 players on the database, of that number, 65 are foreign-born but eligible to play for Nigeria. However, all are being monitored, after speaking to most of them, the process requires diplomacy and constantly keeping in touch.

“When we look at new players, we do it discreetly,” Rohr told ESPN when he was asked how long he had been monitoring the 25-year-old.

He admitted Dessers is a proven goal scorer, as he scored 22 goals in 36 league games for NAC Breda back in 2015 that took them to the promotion, and then joined Utrecht, for whom he scored nine goals in 32 appearances and five in 15 last season before joining Heracles.