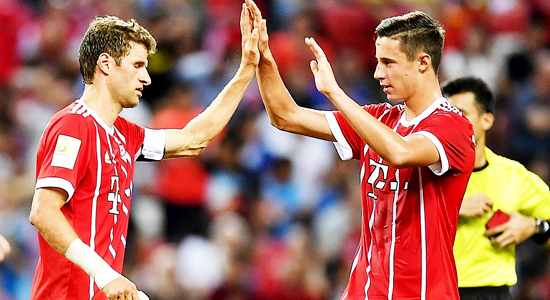 Thomas Muller scored twice Tuesday night as Bayern Munich exhibited its most revered performance in pre-season so far in a 3-2 victory over Chelsea in Singapore.

Alvaro Morata who came on for his first pre-season appearance as a second-half substitute helped set up a goal on his Chelsea debut as the club paid the price for a slow start, falling 3-0 behind when first Brazilian full-back Rafinha came forward and pinged a low shot from 25 yards which found its way into the corner.

Marcos Alonso pulled one for the Blues shortly before half-time.

Morata was instrumental in Michy Batshuayi's late consolation goal during second half that continued to create chances for Bayern, many of which fell to the Spain striker's former Real Madrid team-mate James Rodriguez, who endured a frustrating evening.

Ribery was again the draftsman making the score 2-0 after 11 minutes, skipping into the box and cutting the ball back into the path of the onrushing Muller, who volleyed home from close range.

Muller scored the pick of the goals after 26 minutes after he was put through by Corentin Tolisso and then allowed to run at Chelsea's defenders, who moved away while the German international arched a powerful 25-yard shot past Courtois and into the top-right corner.

Chelsea improved before end of first half and endured a hex of pressure that culminated in Alonso pulling a goal back, projecting the ball across Tom Starke and in after Victor Moses' low cross found him unmarked on the left side of the penalty area.

David Luiz witnessed a deflected effort hit the post, before Chelsea set up a frantic finish when Morata flicked Cesc Fabregas' corner into the path of Batshuayi to bury, but it was too late to alter the result.