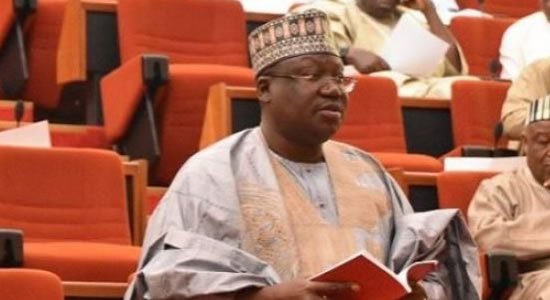 Jumbo Pay: You May Vote Us Out In 2023 For Better Ones, Senate President

The Senate President, Ahmed Lawan concerned by the heated debate in the country over lawmakers jumbo pay has today urged Nigerians that instead of heightening the political space, they should vote out for better once in 2023. Lawan stated in a speech that Nigerians may choose to vote them out if they are not satisfied with their services as lawmakers.

The Senate leader was speaking today during a retreat organized for Top Management of the National Assembly.

Lawan was reacting to the debate going around concerning the jumbo salaries and allowances of the National Assembly members.

In his statement, “Instead of trying to see how N128 billion will be utilized by the National Assembly, what will be the outputs and how useful they are to the Nigerian public, Nigerians only argue that the budget should be cut, it is too much.

He continued, “If you don’t like the set of members of the ninth National Assembly, change all of us in 2023. Get better people but help support the system to function,”

Over the years, the overpaid salaries and allowances of lawmakers have received backlash from various opinions with many Nigerians kicking against the jumbo pay describing it as counterproductive in a nation that lacks basic amenities.