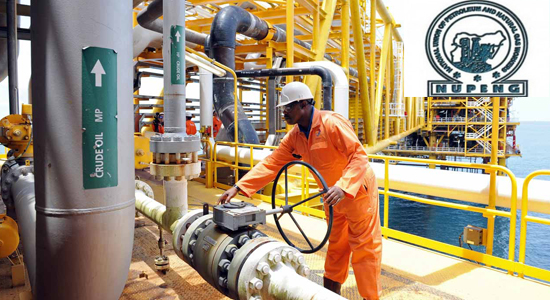 The National Union of Petroleum and Natural Gas Workers (NUPENG) has threatened to begin a strike in the Federal Capital Territory (FCT) over a dispute with Assets Management Company of Nigeria (AMCON). At the end of National Executive Council meeting, Mr Igwe Achese, NUPENG President, said the strike was inevitable because of three billion naira terminal benefits allegedly owed some sacked oil sector workers.

Achese said that those affected were former staff of Seawolf Drilling, an oil servicing firm, in Rivers.

He said the management of AMCOM was being lackadaisical in meeting its obligation of settling the workers.

Achese said more than 300 workers of the oil firm were disengaged unceremoniously in 2013.

The retrenchment of the workers followed the company’s indebtedness to a commercial bank to the tune of N25 billion which led to AMCOM taking over the assets and liabilities of Seawolf.

News Agency of Nigeria, NAN, reports that the workers, who are affiliate members of NUPENG, have been asking AMCOM to pay their severance package without success, he said.

Achese said NUPENG had given two weeks grace to the Federal Government and the Ministry of Labour and Employment to intervene.

‘’For the past four years we have been discussing the issue of redundancy and closure of Seawolf, which AMCON, a federal agency, took over since 2013.

“It is very unfortunate to state that workers engaged to a company that AMCON took over; AMCON has refused to pay them their terminal benefits since 2013.

“Therefore, the union in a very strong resolution, is requesting the Federal Government to prevail on AMCON to open doors for dialogue to pay these workers of Seawolf which it took over.

“Of course, you will agree with me that taking over a company such as the case of AMCON you are taking both liabilities and assets.

“As such we have written series of letters to the Ministry of Petroleum, Ministry of Labour and Employment, to the security agencies and all agencies expected to be notified on this issue.

“We are aware that AMCON instead of paying these workers and negotiating the terminal benefits of these workers has decided to take the matter to court and we have been faced with series of adjournments since 2013.

“We, therefore, have no choice as a union but to write an open letter to Mr President and the acting president to take all necessary steps to address the issues of Seawolf and that of Chevron, ” he said.

Achese said the union had notified the Federal Government in a letter that if it failed to address the issues after two weeks, it would call out its members to withdraw their services in the FCT.

Achese said that it had also directed its members across the country to, in solidarity with the struggle, dress in red and hoist green leaves on their vehicles for the next two weeks.

Achese said that the restructuring must take the form of fiscal federalism such that component states or regions might control their own resources.

“On our part as a union, we canvass for true federalism to be adopted in the country, each state or region should be allowed to control their resources through fiscal federalism.

“This approach, we believe, will reduce the current agitations just the way the regions of old controlled their local resources which made room for healthy competition and development.”