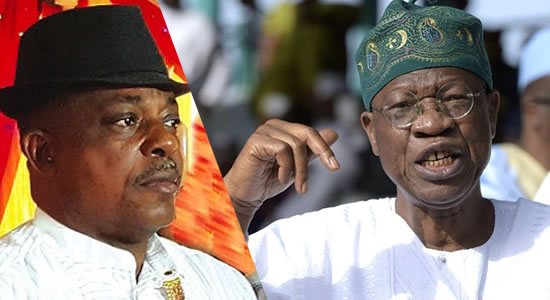 The National Chairman of the Peoples Democratic Party (PDP) Prince Uche Secondus yesterday dragged Information and Culture Minister, Alhaji Lai Mohammed to court for alleged defamation of character. The Minister had a fortnight ago, mentioned Secondus on the list of those he claimed, looted the nation’s treasury alleging that he collected N200 million from the former National Security Adviser (NSA), Colonel Sambo Dasuki (retd).

However, Secondus denied collecting a dime from the former NSA through his lawyer Emeka Etiaba SAN, and promptly wrote a letter to the Minister seeking the immediate retraction of his name on the list, payment of N1.5 billion in damages and public apology within 48 hours.

The letter urged Alhaji Mohammad to note that if he fails to meet the demand after 48 hours, “ We shall within 72 hours from today, proceed to a court of competent jurisdiction to ventilate our client’s right under the law and shall further seek the protection of the court against you.”

Having failed to meet the demand, Prince Secondus yesterday made good his threat and filed a suit at the Port Harcourt, High Court, Rivers State praying among other things that the court awards to him the sum of N1.5 billion being damages for humiliation, castigation, vilification attack on his person and integrity as a result of the publication.

Ike Abonyi, media aide to Secondus, in a statement released on Friday and made available to Vigil360, stated that Secondus has filed a suit against the Minister for defamation of character.

According to a statement, Secondus in the suit is also claiming that Lai Mohammad’s publication is defamatory and is asking the court to direct him to retract the said publication and apologize in writing.

The statement further tasked the Minister to “Publish the retraction and apology in all the social media including but not limited to the following newspapers, the Nation, Thisday, Vanguard, The Sun, Guardian and Punch as well as in NTA and Channels Televisions among others where the defamatory story was published.”

Secondus is also asking the court for a perpetual injunction restraining the defendant (Lai Mohammed) from further publishing defamatory materials against him.