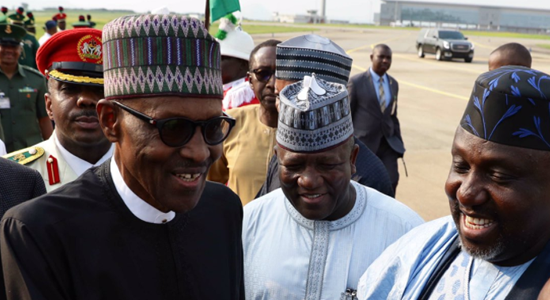 Nigerian President Muhammadu Buhari has returned from London on board Nigeria Air Force One jet, after spending more than 100 days receiving treatment. The President who left Abuja on May 7, for the British capital to receive medical care arrived at the Nnamdi Azikiwe International airport in Abuja on Saturday and walked briskly to the podium to receive the national salute.

Prof. Yemi Osinbajo, his Vice, who acted as president during his absence led the delegation that received Buhari at the crowded airport.

Others at the airport to receive him are service chiefs and members of the Federal Executive Council (FEC), including some governors.

Senate President Bukola Saraki and the Speaker of House of Representatives, Mr. Yakubu Dogara were also at the airport.

He touched the ground at 4.30 pm to the waiting hands of a large crowd of supporters.

Dancers took to their feet to entertain the President.

Buhari is expected to speak to Nigerians in a broadcast by 7am (0600 GMT) on Monday, August 21.

In a telephone conversation relayed live by Channels TV, information minister Lai Mohammed explained that Buhari inspected the guard of honour and also walked to see the Fulani dancers.

The president’s prolonged absence in the country was causing tensions with some calling for him to resign or return.

The 74-year-old leader took his first medical leave in Britain in January this year, which lasted nearly two months. He returned in March saying he had “never been so ill”.

Last June, the president had been to London seeking treatment for what his office said was a persistent ear infection.

While in London, for his second medical leave, the president received many visitors including Mr Osinbajo, and the ruling party and opposition politicians. In most visits pictures were taken and shared with the media in an attempt to quell public anxiety over his health.

Others who visited the president include Archbishop of Canterbury Justin Welby and renowned Nigerian pastor Enoch Adeboye of the Redeemed Christian Church of God.

The news of Mr Buhari’s return has elicited plenty of reaction on social media with some Nigerians thanking God for sparing the life of their president.

Others have castigated those who had been calling for his resignation.

Nigeria’s ruling party, the All Progressives Congress (APC) welcomed President Buhari back home to Nigeria after his medical vacation to the United Kingdom.

In a statement by Malam Bolaji Abdullahi, the publicity secretary, the Party thanked the Vice President Prof. Yemi Osinbajo for his competent leadership in the absence of President Buhari.

The party especially commends him for his effort to unite the country and drive the recovery of the national economy.

The APC also thanked all Nigerians who had prayed ceaselessly for the speedy recovery and safe return of the President, assuring them that the APC-led Federal Government is poised to fulfill all the electoral promises the Party made to Nigerians.