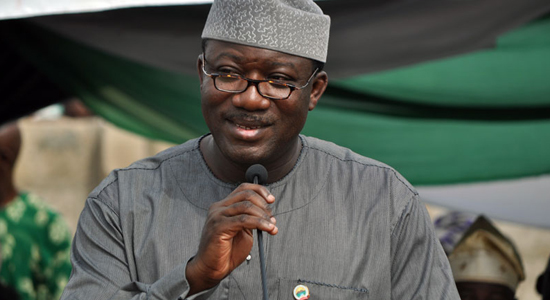 Loyalists of former Ekiti State Governor, Kayode Fayemi, on Thursday set up a campaign structure, JKF Movement, for his yet-to-be declared ambition to run for the 2018 governorship race.

The JKF Movement, is a platform raised to mobilise voters and sell the candidacy of the Minister of Mines and Steel Development in all polling units, wards, local government areas and senatorial districts in the state.

They said the move was premised on what they called “the reality on ground today in the state indicating that we have missed a great opportunity in our failure to continue to enjoy Dr. Fayemi’s services as demonstrated by the unprecedented development witnessed during his four-year tenure.”

Speaking after its inauguration in Ado-Ekiti, the state capital, Chairman of JKF Movement, Pastor Ade Kolade, explained that the main focus of the group was to champion Fayemi’s development vision and ideals and to create awareness that “the current stalment in Ekiti’s development process can be reversed.”

He said Ekiti has retrogressed since Fayemi left office three years ago hence the need to encourage him to come back to power and continue his development agenda for Ekiti to join the league of developed states in Nigeria and a model of good governance.

Speaking on the exoneration of Fayemi by the Oba Ademola Ajakaiye-led special panel which investigated the ex-governor on the alleged mismanagement of N852 million State Universal basic Education (SUBEB) funds, Kolade called on Fayose to disband the Judicial Commission of Inquiry to probe his (Fayemi’s) four-year tenure.

Kolade said: “We condemn Governor Fayose for setting up a Judicial Commission of Inquiry to probe Fayemi after an earlier panel he raised to probe the former governor had exonerated him in the SUBEB loan allegation in Access Bank.

“To come back to the path of development again, we call on Dr. Kayode Fayemi to come back and restore the lost glory of the state because Ekiti cannot afford to take another risk anymore.”

Director of JKF Centre, Mr. Biodun Omoleye, said, “Ekiti is witnessing its darkest moment in her history” with standard of living falling everyday urging the people of the state to take their destiny in their hands by aligning with the Fayemi vision to restore the glory years.

He regretted that development partners have left the state while many businesses and banks are closing down owing to “harsh policies” of the current government.