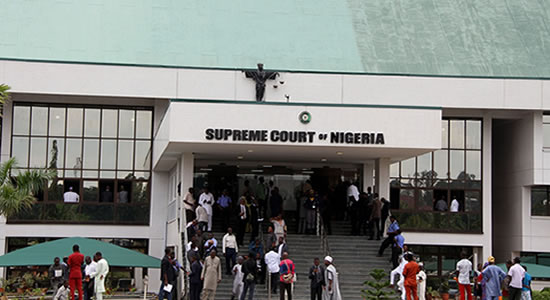 The Coalition of United Political Parties, CUPP, has responded to an earlier statement issued by the Supreme Court in response to the Coalition's allegation that the Chief Justice of Nigeria was plotting to jettison an age-long tradition of the apex court on the selection of Justices to be members of the Presidential election appeal panel.

The CUPP had claimed that the CJN was planning to handpick Justices into the appeal panel to do his bidding instead of selecting most senior Justices at the apex court. In response, the Supreme Court on Monday described the allegation as “blatant falsehood, misinformation and malicious rumour being generously peddled.” The court warned the party to stop what it termed orchestrated falsehood and campaign of calumny.

Reacting to the statement on Tuesday, the CUPP said the attack on it (CUPP) is a confirmation of its earlier claim that there was an unholy alliance of the apex court and the ruling All Progressives Congress, APC. CUPP insisted that there was an ongoing plan to alter the order of appointing Presidential Election Appeal Panel and handpick the members.

The statement issued by CUPP spokesman reads in full;

“The Coalition of United Political Parties (CUPP) has again read with dismay a statement credited to the Supreme Court in which the apex court that is expected to be neutral on all issues descended heavily on the coalition for alerting Nigerians on the issue that concerns them and the nation.

“The Supreme Court has by that statement successfully descended into the arena, has taken sides and has decided to join issues with the opposition perhaps because the supposed quiet plan and alliance with the APC led Federal Government had been botched.

“The CUPP and opposition have before now exposed the plan to alter the order of seniority which is used in appointing Supreme Court justices that sit on presidential appeal since 1979. We had insisted that the plan is to truncate the appeal filed by the Coalition consensus candidate and Presidential candidate of the Peoples Democratic Party, Alhaji Atiku Abubakar.

“It is noteworthy that the attack on CUPP by the highest court in the land came less than 24 hours after the APC issued its own statement in which it threw caution to the wind, fired a childish arrow at the grand opposition alliance and said unprintable things about the opposition while not addressing the issues raised and making claims of Nigeria being an imaginary one-party state.

“We know of a fact that it is not a coincidence that the two separate statements from the ruling party and the apex court came almost the same time. The releases were clearly syndicated. It is a confirmation of our long-time believe that something sinister is going on.

“They have confirmed that they are both reading from the same book and are on the same page. It is expected that those concerned will be coming out of their holes one after the other because the opposition has exposed them.

“The Chief Justice of Nigeria, Tanko Muhammed, has, by this statement smelling of malice and hatred for opposition members, removed his mask and through the Supreme Court attempted to attack the integrity of the opposition grand alliance, the CUPP, and twist facts.

“Nigerians should also note that nowhere in the entire statement did the Supreme Court summon the courage to deny the facts so clearly stated by the opposition, knowing the same to be true and correct.

“So, who are those people with ‘inordinate ambition’ that the Supreme Court is talking about? Is the Court trying to tell us that any of the litigants has inordinate ambition which must not be allowed to see the light of the day?

“Has the Supreme already given the judgment of the appeal in a hurry without even constituting a panel? Such a harsh biased comment should not emanate from a highly respected Court as the Supreme Court of Nigeria. The person who made that Statement should know that the Court exists to serve Nigerians and Nigerians have all the rights to share concerns regarding real events that have recently become the norm in our Judiciary.

“If the Spokesperson of the Supreme Court had nothing dignifying to say, the Court should have maintained a respectable silence. Using words like “orchestrated campaign of calumny” has brought the Court to the arena of politics.

“What is expected of any Supreme Court was to simply reassure citizens of its dedication and commitment to do justice, instead of attacking citizens. Is there anything that this Court wants us to do? Does the Supreme Court also want to curtail citizens’ freedom of speech?

“If the Court can speak so harshly to citizens for expressing concerns about justice, then we are doomed to accept the gagging of media by the Executive as a normal act. God help us.

“We are therefore assuring those who have made it their new occupation to be attacking the Opposition that they will soon hear from the CUPP on indisputable facts and evidence of abuse of office against them which will put a big question mark to their continued stay in the public space.

“Now that they have fetched ant-infested firewood, they have called a party for the lizards.

“The ongoing attack on the Opposition by both the Supreme Court and APC including the threats of intimidation and harm against the coalition spokesperson Ikenga Imo Ugochinyere will not make us abandon the struggle for justice/fairness and our opposition to the strange move to alter the order of seniority in composing the panel of Justices to hear Atiku’s Appeal at the Supreme Court.

“The Nigeria Opposition Coalition CUPP wishes to state clearly that the only way out of this challenge is for the CJN to constitute the Supreme Court panel that will hear Atiku’s appeal in order of seniority in accordance with the age-long tradition that has been in practice since 1979. This will create a semblance of shielding the Supreme Court from the politics of the APC and the hijack agenda of the Federal government.

“The world and Nigerians are watching and waiting for the official composition of the panel to sit on Atiku’s Presidential election Appeal to know if the Supreme is still independent or has been hijacked by agents of the Buhari APC.

“We stand on this call and we make bold to say that no amount of blackmail and campaign of calumny from the Supreme Court and the APC, jointly or separately, will make us shift ground.”