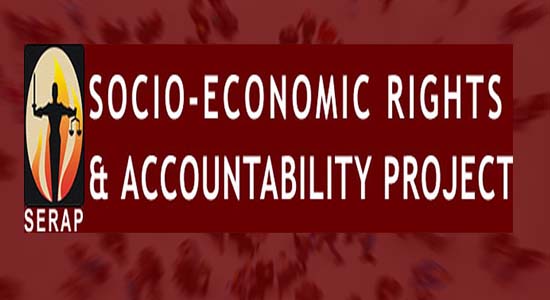 The Socio-Economic Right and Accountability Project (SERAP) has called on the Independent Corrupt Practices and other Related Offences (ICPC) to as a matter of urgency investigate the allegation surrounding the hoarding of the COVID-19 palliative by some state governors.

SERAP petition was premised on the allegation that COVID-19 palliatives that were meant for the populace were looted away in numerous warehouses across some states.

Contained in the petition sent to the ICPC boss, Prof. Bolaji Owasanoye SERAP demands that the agency must prosecute any person/persons responsible for this nefarious act no matter his position as long as there is admissible evidence of such.

The petition dated 24th October 2020 signed by its Deputy Director, Kolawole Oluwadare, SERAP said, “It would seem that Nigerian authorities asked people to stay at home as a protective lockdown measure but then failed to discharge a legal responsibility to timely, effectively, and transparently distribute COVID-19 palliatives to ease the hardship faced by the poorest and most vulnerable people.”

The organization continued, “Unless promptly investigated, the allegations of hoarding and diversion would undermine public trust in any efforts to bring the spread of the pandemic under control, exacerbate the negative impact of the crisis, and deny those most in need access to basic necessities of life.”

SERAP also urged the ICPC “to visit the states where COVID-19 palliatives have been discovered in warehouses and to track and monitor the distribution of palliatives across the 36 states of the country, and the Federal Capital Territory, Abuja, to remove the risks of diversion, and ensure that the palliatives get to those most in need, and not used for political or corrupt purposes.”

Also copied to Prof. Itse Sagay, the petition said, Chairman, Presidential Advisory Committee Against Corruption (PACAC), read in part: “Some people have reportedly discovered and taken away COVID-19 palliatives stored in warehouses in several states including Cross River, Edo, Ekiti, Kwara, Kaduna, Lagos, Osun, Plateau and Taraba states, with some of the people reportedly saying: ‘the food is ours but they are keeping it for themselves’.”

“Promptly attending to these recommendations would show your agency’s willingness to proactively exert your mandates, as this would act as a deterrent against breaches of Nigeria’s constitution, anti-corruption legislation, and international standards, as well as ensure the transparent and accountable distribution of COVID-19 palliatives and other reliefs.”

“In particular, Section 15(5) of the Nigerian Constitution provides that ‘The State shall abolish all corrupt practices and abuse of power.’ Similarly, the UN Convention against Corruption requires the authorities to ensure effective, proportionate, and dissuasive sanctions and penalties for hoarding and diversion.”

Therefore, SERAP urged the ICPC to mount pressure on the Federal government and the state authorities to develop a road map for the following;

1. Develop clear criteria on who exactly qualifies for COVID-19 palliatives and other reliefs to ensure that the palliatives are not used by corrupt officials to benefit themselves and their political supporters at the expense of the intended beneficiaries;

2. Seek and publish distribution information from federal and state authorities, including details of the timelines of distribution of COVID-19 palliatives and other reliefs, as well as the logistics that have been put in place to facilitate the distribution;

3. Seek and publish details of palliatives and other socio-economic reliefs that federal and state authorities have so far provided to the poorest and most vulnerable people, including the list of beneficiaries of any such palliatives and reliefs;

4. Open public complaints reporting mechanism on the distribution of COVID-19 palliatives and other reliefs to ensure access of citizens that may be unduly denied the aid to justice and effective remedies;

5. Work with federal and state authorities to identify which areas remain most in need of palliatives and other reliefs and ensure timely, effective, efficient, transparent, and accountable distribution to the intended beneficiaries