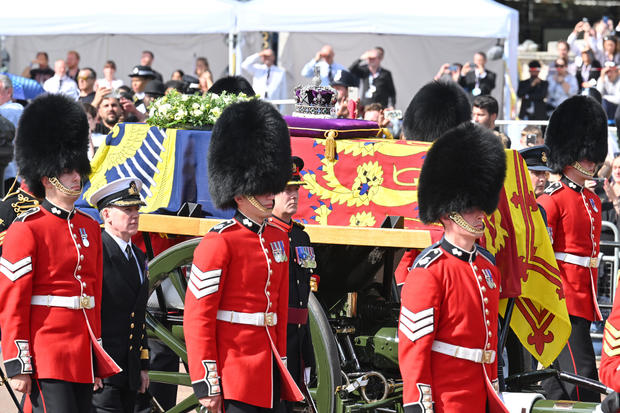 The coffin of Queen Elizabeth II began moving in a procession through central London on Wednesday from Buckingham Palace to Westminster Hall, where the late monarch will lie in state for four days until her funeral on Monday. The Queen’s coffin is being transported on the George Gun Carriage, which carried King George VI’s coffin from Sandringham Church to Wolferton Station in February 1952. The gun carriage was also used during the funeral of the Queen Mother in 2002. William and Harry have joined their father King Charles III for the Queen's coffin procession as it makes its way to Westminster Hall. The most senior members of the royal family are taking part in the procession, a roughly 40-minute walk, in silence, from Buckingham Palace to Westminster Hall, including the new monarch King Charles III and his sons, Prince William and Harry, the Duke of Sussex.

The procession includes the tolling of the bells of Big Ben, the iconic clock tower in Parliament Square, and a gun salute at Hyde Park nearby.

A short service will be held when the coffin reaches Westminster Hall, which the royal family will attend. The coffin will rest on a raised platform, which will be guarded around the clock for the full four-day lying in state period by members of various British military regiments assigned to royal protection duty.

Earlier it was announced that the queue to view the Queen’s lying-in-state will be temporarily closed to new entrants if it reaches 10 miles.

The coffin of Queen Elizabeth II arrived at Buckingham Palace from St Giles Cathedral in Edinburgh on Tuesday, where it was received by the King, the Queen’s grandchildren, their spouses and other senior royals.

Members of the public will be able to visit the queen's coffin at Westminster Hall to pay their respects. Crowds had already gathered early Wednesday morning to view the procession, and a line had begun to form of people waiting to file past the queen's coffin. The doors of the ancient hall on the bank of the River Thames were to open to the public from 5 p.m. local time.