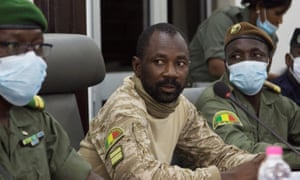 Mali popular opposition movement said it rejects in totality the charter for a transition government being supported by the military junta who overthrow President Ibrahim Boubacar Keita.The Military-junta yesterday ware championing the 18-month transition government after a three-day consultation with other political parties and civil society groups. However, the June 5 movement who was also part of the deliberation kicked against the proposal, saying the junta was only interested in “desire to monopolize and confiscate power”.

Though it was revealed that the discussion was against the backdrop of “intimidation, antidemocratic and unfair practices worthy of another era”

The June 5 movement accused the Junta of failing to include the working group in the final document sighting example as its support for the return to civilian rule.

A committee chosen by the junta, which was overseeing the talks, adopted the final version of the charter by applause on Saturday.

The committee reporter disclosed to delegates that either civilian or a Military can serve as the transition President.

Though the latest version of the report is yet to be made available, the earlier one sighted yesterday suggests the military influence as it stipulated that only the junta and handpick the transition president.

The June 5 Movement is a loose coalition of opposition groups, made up of religious leaders and civil society figures who organized a months-long wave of protests that lead to the ousting of President Keita, by a military coup on August 18.

It was hinted that some seats in the 121-person legislature foreseen in the charter are reserved for members of the movement who overthrow the Keita government.