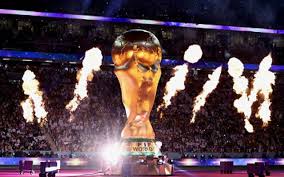 The emir of Qatar welcomed the world to the most prestigious soccer event, this marked the first time the tournament has been staged in the Middle East. The emir opened the World Cup opening ceremony in Qatar’s Bedouin roots, embodied in a tent-shaped stadium.

At the spectacular ceremony, he kissed his father’s hand and welcomed the world to soccer’s biggest event, the first time it has been staged in the Middle East.

“From Qatar, from the Arab world, I welcome everyone to the World Cup 2022. How lovely it is that people can put aside what divides them to celebrate their diversity and what brings them together,” Sheikh Tamim bin Hamad Al Thani said.

The stadium erupted in cheers when sheikh Tamim arrived at the stadium flanked by FIFA president, Gianni Infantino.

American actor, Morgan Freeman, followed Ghanim Al Muftah, a 20-year-old Qatari man who was born with a rare condition that impairs the development of the lower spine.

Freeman sat on the pitch beside Al Muftah.

“How can so many countries, languages and cultures come together if only one way is accepted?” Freeman told the crowd.

“When you call here, we welcome you into our home,” Al Muftah said, referencing the “Bayt al sha’ar” or tent that nomadic bedouins of the Arabian peninsula once used for shelter, which inspired the stadium design.

The ceremony featured video footage of Sheikh Tamim as a boy playing soccer in the desert, which seemed aimed at countering the argument made by Qatar’s critics that the Gulf Arab state has no soccer tradition.