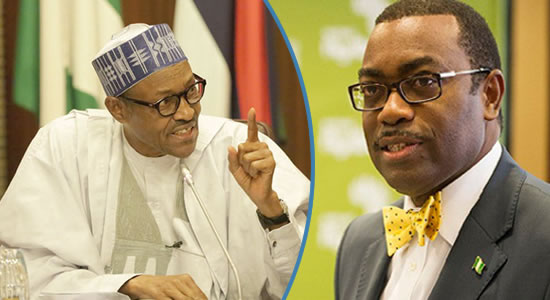 President Muhammadu Buhari has congratulated Akinwunmi Adesina on his re-election for a second term in office as the president of the African Development Bank (AfDB). In a statement issued by Femi Adesina, Special Adviser on Media and Publicity, President Buhari congratulated Adesina on behalf of the Federal Executive Council and Nigerians in general. Mr. President also extended his appreciation to the African Union for its endorsement of the AfDB President much earlier, and to shareholders of the bank who worked assiduously to ensure the return of the visionary leader.

The president promised complete support of his government to ensure a successful tenure for the AfDB leadership and prays that the Almighty God will continue to make stronger Adesina and his team for the greater good to the African continent.

Board members of the African Development Bank (AfDB) had on Thursday re-elected Akinwumi Adesina for a second five-year term as AfDB president, during its annual meeting, which is being held via video link.

Adesina, who was running unopposed, gained 100% of votes cast, the Abidjan-based bank said in a statement.

His reappointment comes after the bank’s ethics committee and an independent panel investigated whistleblowers’ allegations that he had abused his office and have cleared him of all wrongdoing in July.