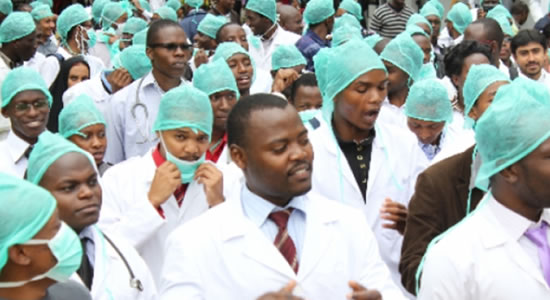 The National Association of Resident Doctors (NARD) has suspended its plan to embark on a nationwide strike slated to begin on September 4. The resident doctors had earlier threatened to down tools by September 4th, 2017 unless the Federal Government meets their demand of immediate enrollment in the Integrated Payroll and Personnel Information System (IPPIS).

The government met with the leadership of the association and promised to address the demands.

The decision to suspend the strike was reached after several hours of meeting between the Minister of Labour and Productivity, Chris Ngige and members from the Ministry of Health, as well as officials of the national association of resident doctors (NERD), in Abuja.

After the meeting, Ngige said they have adjourned to November 2nd, 2017 for further deliberation on issues that affects the emoluments and welfare of the resident doctors.

The members of the association and the ministers of labour and employment, and health has therefore agreed that normal services would continue to be rendered by the doctors pending the resolution of the issues in dispute.

According to him, the action is a sequel to a statement signed by Drs John Onyebueze and Aneke Emmanuel, National President and Secretary of NARDs, respectively.

The statement said that it was resolved at the NEC meeting of NARDs held in Abuja on Aug. 26 to embark on the strike.

“Neither the federal nor state governments have shown commitment to the resolution of issues at stake nor honoured previous agreements.


“Consequent upon this, the association resolved to proceed on a total indefinite industrial action from Monday, September 4, 2017, until all these issues are permanently resolved.

“All heads of tertiary health institutions who have received funding for payments to our members should be directed to pay same immediately,” it said.

NARD is demanding for the resolution of persistent shortfalls and unpaid arrears of salaries earned in both federal and state tertiary health institutions.

Other issues are the enrollment of resident doctors into the Integrated Personnel Payroll Information System (IPPIS) since 2003, and non-implementation of adjusted House Officers’ Entry grade level equivalent since 2014.

The resident doctors are also asking for the resolution of issues of stagnation and promotion and non-promotion of members who have met requisite criteria despite all collective bargaining agreements and circulars.