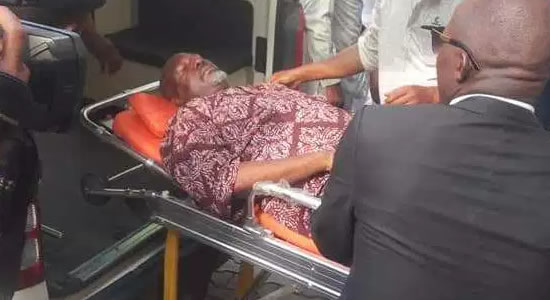 The Kogi State Chief Judge, Justice Nasir Ajanah, on Friday granted an interim order for the Senator representing Kogi West, Dino Melaye to be transferred to the National Hospital Abuja, while hearing for his bail conditions will be heard next week Monday. Justice Ajanah gave the order at the High Court in Lokoja when Counsel to Melaye, Mike Ozekhome (SAN) filed processes for motion seeking the bail of the Senator who is standing trial for conspiracy and gun running among other charges brought against him.

The CJ according to Dailytpost, had explained while giving the order that the move was to enable the senator to have access to adequate medical attention since the Police Clinic in Lokoja where the Senator is currently receiving treatment lacks the facilities to provide the needed services.

The Chief Judge disclosed that the interim order became necessary as the prosecution could not provide a federal prison in Abuja that has the required health facilities that will take care of the health condition of Senator Melaye.

The Chief Judge ordered the commissioner of police to be served through his counsel in court, while the Senator be taken to the National Hospital Abuja, still under the custody of the Police.

While arguing his case for bail, Ozekhome appealed for a speedy trial of the matter. He told the Chief Judge that his client’s health was critical, hence the need for him to be transferred to the National Hospital Abuja for proper medical care, before the next adjoined date. He maintained that only the living can stand trial.

Since the Prosecution counsel did not object to the motion, the CJ granted the prayers and adjourned the matter till Monday for parties to argue the bail application.