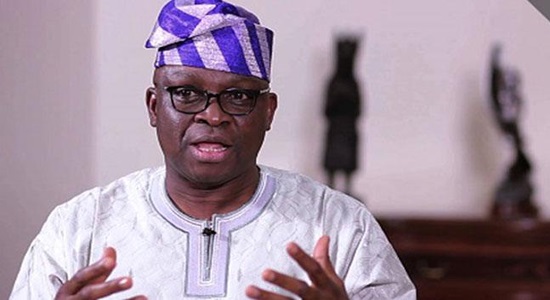 The All Progressive Congress (APC) in Ekiti state has today called on the Economic Financial Crime Commission (EFCC) to arrest the immediate past Governor of the state, Ayodele Fayose to explain the whereabouts of the N400 million earmarked by Dr Kayode Fayemi administration to rehabilitate Ado - Akure road that were diverted by Fayose administration.

Ade Ajayi, the APC State Publicity Secretary disclosed this in a press conference organised today by the party in Ado Ekiti the state capital, threatening to drag Fayose to court if he fails to explain where he kept the money.

Ajayi demanded that Fayose must explain why he terminated constructing the portion of the road awarded by Fayemi to KOPEC Construction Company in 2014.

The Party accused former governor Fayose of being responsible for the deplorable condition of the road in Ado –Akure, calling on the former Governor to rather shut up that making some utterances that will be more indicting.

The public wants to know whether he terminated that contract for Afao Road because the Ado – Akure Road is very germane to our economy in Ekiti.

“The APC, as a responsible and patriotic party, will drag the former governor to the EFCC if he fails to give a satisfactory explanation about the money.

Why was the former governor now lamenting?

We were able to decode that he had an ulterior motive, which was to dent the image of Governor Fayemi.

According to the party secretary General, Fayose that is responsible for the deplorable condition of roads in the state is now lamenting, instead, he should produce our money.

He said Fayose has been running his mouth instead of telling Ekiti people the whereabouts of their fund.