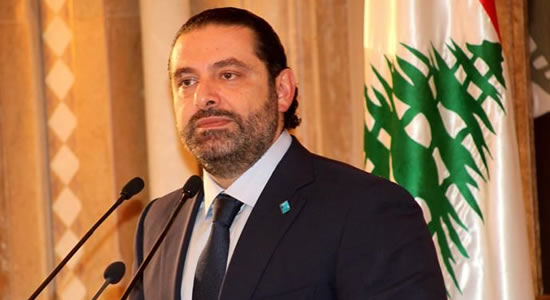 Former Lebanese Prime Minister Saad Hariri has arrived in Paris, the capital of France to meet French President Emmanuel Macron.His trip came two days after French Foreign Minister told reporters in Saudi Arabia that Hariri was not in detention and that he has agreed to visit France to hold talks with Macron on political situation in Lebanon.

Ahead of the visit, Macron had stated that he would accord Hariri all the honour due a Prime Minister. Speaking at a conference in Gothern burg on Friday, Macron said;

"I will ... welcome Prime Minister Hariri with the honours that are due to a prime minister, indeed resigned, but whose resignation hasn't yet been recognized in his country, as he hasn't been there. So nevertheless I'll welcome him as prime minister. Prime Minister Hariri then has the intention, I believe, to return to his country in the following days or weeks. It's for him to discuss his own future, but I don't have any doubts about this subject."

After Hariri announced his resignation early this month and remained in Saudi Arabia, Lebanese President Michel Aoun accused Saudi authorities of illegally detaining him describing the action as 'act of aggression.' Russia also threatened to drag the matter before the United Nations.

Meanwhile Saudi Arabia's Foreign Minister Adel al-Jubeir has repeatedly debunked claims that Hariri is under arrest. The Kingdom said Hariri was in the country on his own volition and was free to leave anytime he desires to.

On Friday, Hariri also debunked the detention claim in a tweet posted on his verified Twitter handle @saadhariri. He tweeted "to say that I am held up in Saudi Arabia and not allowed to leave the country is a lie. I am on the way to the airport Mr. Sigmar Gabriel."

Hariri had in his resignation statement accused Iran and Hezbollah of interfering with internal developments in Lebanon. He also said his resignation was to avert possible assassination, stressing that he fears the fate that befell his father could repeat itself. His father was assassinated.

Meanwhile the ruling party in Lebanon has rejected his resignation and has called on him to return to the country.