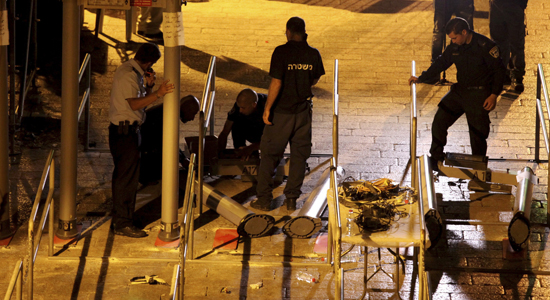 Israel has removed metal detectors from outside a holy site in East Jerusalem after uproar from Palestinians over their recent introduction.

The BBC reports that Israel's security cabinet voted early on Tuesday to remove and replace them with less obtrusive surveillance.

There were deadly clashes after the metal detectors were set up, which Palestinians saw as an Israeli attempt to assert control over the site.

Israel said they were necessary to prevent weapons being smuggled in.

It followed the killing on 14 July of two Israeli policemen by Israeli-Arab gunmen, who police say had hidden their weapons on the hilltop site known to Jews as the Temple Mount and Muslims as Haram al-Sharif.

A statement from Israeli Prime Minister Benjamin Netanyahu's office said the security cabinet accepted "the recommendation of all the security bodies to change the inspection with metal detectors to a security inspection based on advanced technologies and other means".

It said the new, unspecified, measures, costing 100m shekels ($28m), would be put in place over the next six months. Until then, extra police would be deployed around the site, it added.

The crisis at Jerusalem's most revered site was about much more than the existence of the airport-style gates and electronics of the metal detectors themselves.

For Palestinians, their installation symbolised what they saw as an attempt by Israel to assert further control over the site of their holy shrine in occupied East Jerusalem - the mosque that also acts as a powerful symbol of their national aspiration.

For Israel's government, the move represented the need to secure what one minister called "the most sensitive location on Earth" - Judaism's most holy place - after the murder of two Israeli police officers close by.

Leaders will have felt pressure from within their own constituencies not to be seen to back down.

The installation of the metal detectors the day after the police were killed drew angry protests from Palestinians and days of clashes with Israeli security forces.


The violence left four Palestinians dead in East Jerusalem and the occupied West Bank, while three Israeli civilians were stabbed to death by a Palestinian who had said he was avenging Israeli measures at the holy site.

On Monday the UN's Middle East envoy warned of "potential catastrophic costs" even beyond the region if the issue was not resolved by Friday, when Muslims traditionally flock to the site for prayers.

Many Palestinians had refused to go to the site as long as the metal detectors were there, holding prayers in the street outside the Old City instead.