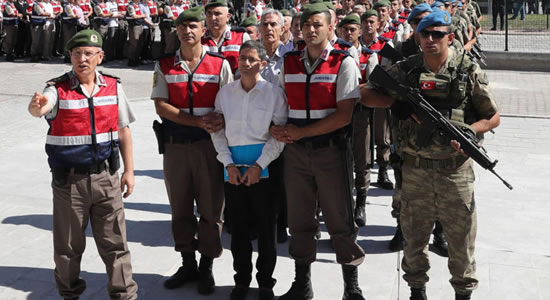 Nearly 500 suspects including army generals and pilots went on trial in Turkey on Tuesday, many of them accused of commanding last year's failed coup attempt from an air base in the capital Ankara.

Families of those killed or wounded protested outside the courthouse, with some throwing hangman's nooses or stones toward the defendants as they arrived under tight guard, shouting "murderers" and demanding that the death penalty be reinstated.

The government declared a state of emergency after the coup attempt and embarked on a large-scale crackdown that has alarmed Western allies of Ankara, a NATO member and candidate for European Union membership.

Reuters News reports that a total of 461 suspects jailed pending trial were brought to the courthouse, handcuffed and each flanked by two gendarme officers. Seven defendants are still on the run, while another 18 have been charged but not in jail.

The main defendant in the case is the 76-year-old U.S.-based cleric Fethullah Gulen, whose followers are blamed by the government for carrying out the failed coup. Gulen is being tried in absentia and denies any role in the coup attempt.

Former air force commander Akin Ozturk and other defendants stationed at an air base northwest of the capital are accused of directing the coup and bombing government buildings, including Parliament, and attempting to kill President Tayyip Erdogan.

If convicted, many of the 486 suspects risk life terms in prison for crimes that include violating the constitution, attempted assassination of the president, trying to abolish the republic and seizing military headquarters.

Several similar cases are under way in Turkey after the coup attempt on July 15, 2016, that resulted in some 250 deaths. Some 30 coup plotters were also killed.

The authorities declared a state of emergency following the coup and embarked on a crackdown on Gulen's network and other opponents, arresting more than 50,000 people and purging over 150,000 people from public sector jobs.

Alarmed by the crackdown, Germany wants to suspend talks about modernizing the EU-Turkey customs union and wants measures implemented to raise financial pressure on Turkey to respect the rule of law, according to a draft paper seen by Reuters.

Erdogan's government says the purge is needed to address Turkey's security challenges and to root out what it says is a deeply embedded network of Gulen supporters - who were once Erdogan's allies until they fell out in 2013.

The government says the coup-plotters used Akinci air base as their headquarters. Turkey's military chief Hulusi Akar and other commanders were held captive for several hours at the base on the night of the coup.