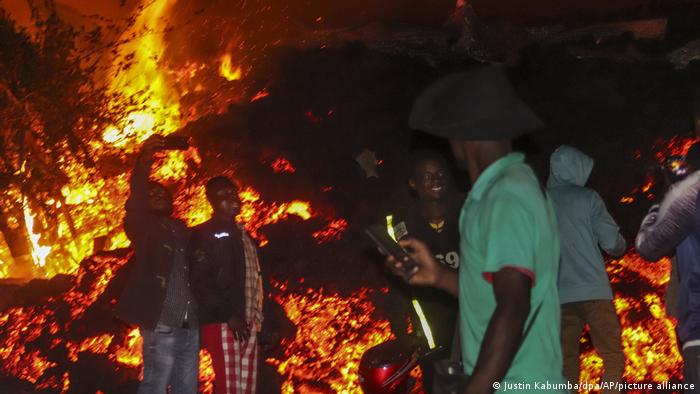 Thousands Evacuated Over Fears Of Another Volcano Eruption In Congo

Days after a deadly eruption of Mount Nyiragongo in Democratic Republic of Congo, the threat of another eruption forced the evacuation of tens of thousands of the people of Goma city. Officials on Thursday worried that lava flows into Lake Kivu would generate a tsunami and toxic gas cloud ordered partial evacuation of the city. The early eruption killed more than two dozen people. These necessitated scientists and local authorities to issue warnings that the danger had not passed. Just 2.5 miles beneath the unsteady ground, scientists detected a flow of magma, a lake of fire just beneath the city, and the fear was that the tectonic activity could trigger a new eruption.

Goma city is half empty at present, as it looks like a ghost town. The town of Sake is full, and so they are moving into neighbouring Rwanda, the Virunga National park, or even across Lake Kivu.

Tens of thousands of people jammed highways, crowded boats, and set off on foot to flee this major African city Humanitarian Aid agencies are responding to people, with displaced persons requiring food, shelter, water, and sanitation.

Optimistically, there were fewer tremors on Thursday night, prompting some to hope this could be coming to an end. However, ominous sounds can be heard coming from Mount Nyiragongo.