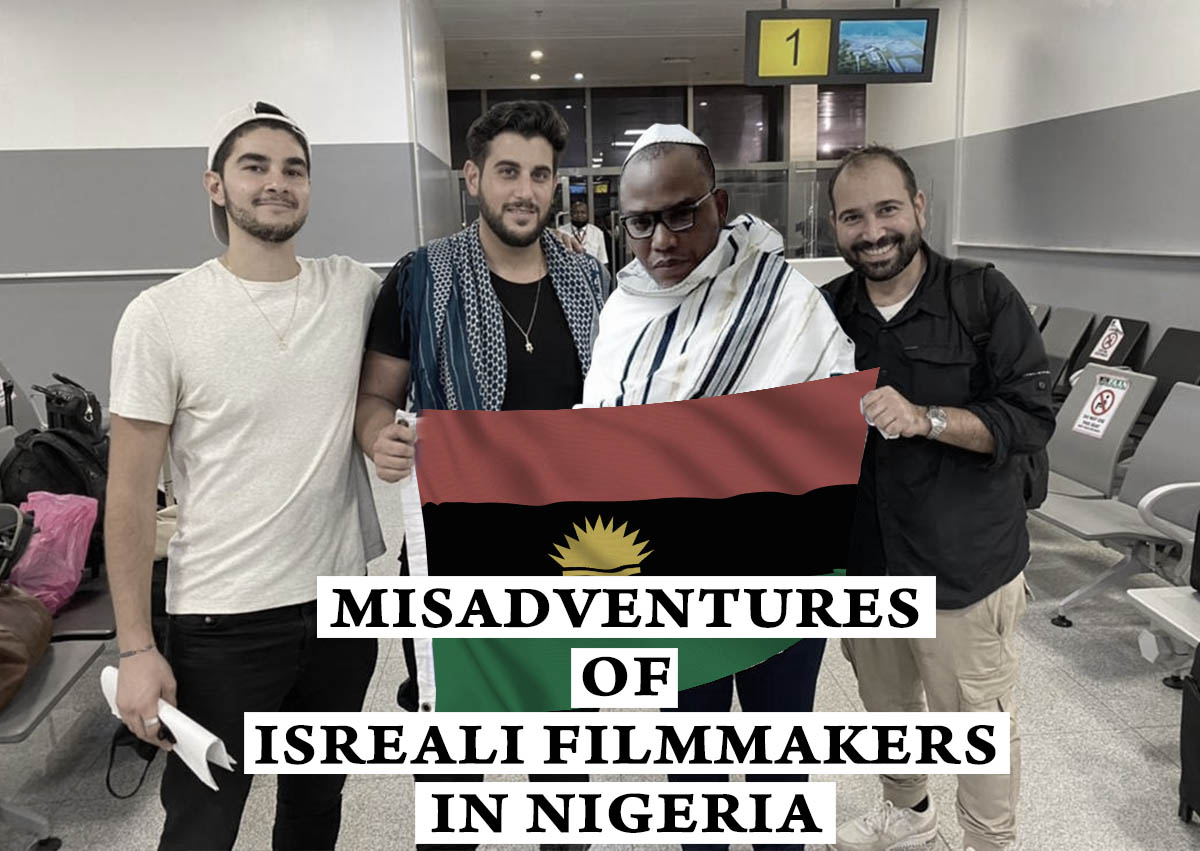 Misadventures Of Israeli Filmmakers In Nigeria

The uproar surrounding the arrest and detention of 3 Israeli filmmakers in Nigeria by the Department of State Services is unnecessary and misconceived. The desperate move exhibited by the trio in hastily releasing a video to paint the country and the intelligence agency in bad light further justifies an innate motive to cast aspersions.

On arrival in Nigeria on 6th July, 2021 Rudy Rochman, David Benaym and Noam Leibman under the guise of filming a documentary tagged “We were never lost” proceeded directly to Ogidi community Idemili North LGA, Anambra State and began recording. If the trio had no bad intentions as they claim, why did they go directly to Anambra State without contacting the Ministry of Foreign Affairs or Information and even the National Film and Video Censors Board which is the regulatory body set up by Act No.85 of 1993 to regulate films and video industry in Nigeria. Isn’t this suspicious? If they were here for filmmaking, wouldn’t they consider it as a courtesy to seek collaboration with these relevant agencies.

With the nature of security cordon in Isreal, could any Nigerian visit Israel and start filming such documentary? Would Mossad or Israel Security Agency (Shin Bet) stand idly and allow any Nigerian surreptitiously go to Ramalan, West bank, Sinai Peninsula, Golan Heights, East Jerusalem or Gaza strip in the name of filmmaking? Shouldn’t the arrest of these supposed filmmakers by the DSS, an intelligence agency saddled with the responsibility of detecting and preventing threats against the internal security of Nigeria prove to the world and gullible Nigerians their effectiveness in carrying out their constitutional roles? Would any serious sovereign country condone such infringement of their territorial integrity?

It is even more intriguing that the timing of their filmmaking coincides with heightened agitation by the proscribed Indigenous Peoples of Biafra (IPOB) whose members claim to be Jewish.

Also, how come the filming coincides with the timing of the arrest of IPOB leader, Nnamdi Kanu, who on several occasions affirmed he is Jewish? Shouldn’t an effective intelligence agency deploy all necessary mechanism to detect activities with criminal intent especially that it involves foreigners who mostly exploit such situations for espionage purposes? I will not be surprised these filmmakers actually entered into Nigeria with Tourists Visas to avoid being detected! Their greatest undoing therefore was undermining Nigeria’s intelligence agency, the DSS and the power of its eagle eye.

Meanwhile the fuss about their experience in DSS detention facility is also unnecessary if not laughable. Was their arrest done outside the rule of detention? Should they have been accorded a 5-star treatment in custody because of their nationality? Nothing they have passed through come close or can be compared to what is going on in Israeli detention centres.

Amnesty International and other reputable human rights groups have repeatedly condemned Israel over allegations of physical torture including depriving an interrogee of sleep for a number of days by binding him or her in painful positions; covering their head with a filthy sack; exposing the interrogee to extreme heat and cold; using threats and curses, and feeding them poor-quality and insufficient amounts of food among others. During their interrogation by the DSS or detention, were they subjected to any of the aforementioned ill-treatments?

Fortunately, in the video, Rudy Rochman alleged they had no grape juice or wine to observe Shabat but contradicted himself when he admitted to finding grapes and crackers to perform the ritual. If the DSS wasn’t professional and conscious of their rights, would they have even bothered to provide alternatives to enable them perform the religious obligation (Kiddush)?

Furthermore, I want to believe that it is in the spirit of diplomacy and international relations that the trio were granted access to Israeli Ambassador and representative of US Embassy. It however beats my imagination that even with the superiority and influence the two countries wield, how come they couldn’t secure their immediate release or condemned their detention, if truly they had no case to answer? How come they were not able to explain to us the reason they were still held for additional 15 days after the visit? Wasn’t the DSS magnanimous enough to allow them these privileges? Do their claims of maltreatment even come close to allegations of unfair trial of Palestinian civilians, including children and even denied medical help in detention centres? He that must come to equity must do so with clean hands!

In my opinion, the prompt interception of the filmmakers deserves commendation by Nigerians and not condemnation. I am also certain that Nigeria would have prosecuted or detained them further but decided to release and deport them on the basis of international diplomacy with Israel. Releasing a video afterwards that desperately suggest their arrest and purported experience in custody exemplifies the plight of Igbos in the country betrayed their real intent.

What has become their misadventure was actually to incite the Igbos against the Government of the day.  Their rage could also stem from the wrong perception that Africa is inferior with weak security architecture thus, the expectation that they can enter Nigeria undetected. To their surprise, their operation was not only detected and disrupted but they were sent back home disgraced.

Consequently, their subversive reaction to disparage the Nigerian Government and its security agency in addition to their desperate quest to whip up sentiments and draw sympathy of the Igbos is not unexpected. They were shocked!

Finally, while lauding the efforts of security agencies in safeguarding the country against hostile forces, I recommend that this feat should be included in intelligence management curriculum for security agencies to be used to cite example of disruption of espionage networks. For the trio, I advise that instead of resorting to campaign of calumny, they should follow due process in their next adventure to Nigeria and any other sovereign country. Their misadventure should serve as a lesson to others with similar intentions.