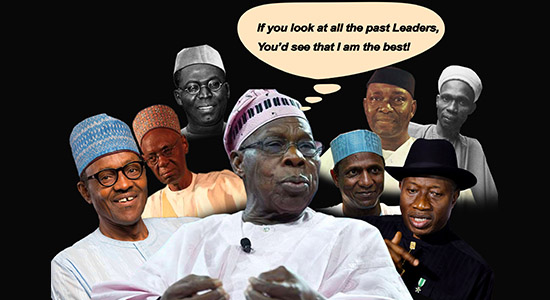 Political maturity in saner climes requires leaders to offer political solutions to issues confronting the country and support the government's quest to improve the living standard of the populace. The case is different in Nigeria where past leaders, not favourably disposed to the government of the day constitute themselves into opposition in order to "PULL HIM DOWN".

Obasanjo leads in this regard. He has become a habitual critic, condemning all governments in open and private letters, interviews and speeches at events. He is notorious in criticism that he has criticized all administrations except his own. Months to the elections, he intensified attacks on Buhari's government, after declaring support for Atiku and the PDP. Following his failed attempt to install Atiku, he has resumed his duty, CRITICISM.

In a recent interview with Premiumtimes, the Owo born politician claimed that Buhari was putting the country on the path of disaster. That the government has corrupted the anti-graft organizations he put in place to fight corruption; he also claimed that no meaningful development had been recorded. He listed his own achievements to include hosting Common Wealth leaders, securing debt reliefs, and attaining an inflow of $80m per day.

Since there is a nexus between age and memory loss, we may have to remind OBJ that he laid the foundation for the present socio-economic and political realities. His government budgeted over $16bn for power, yet bequeathed darkness. All railways were comatose during his reign with little or no efforts to revamp the sector. The roads were worse-off. Between 2001 and 2005, over 33, 600 people died from road accidents while 34,200 people sustained varying degrees of injuries due to the poor condition of roads according to World Bank statistics.

On the corruption of anti-graft agencies, Obasanjo deserves commendation for establishing EFCC and ICPC. However, it is in the public domain that he turned these organizations into private security guards with an adjusted mandate of hunting down perceived political opponents. Opposition leaders were harassed, arrested, tortured and even denied bail by Ribadu on the orders of OBJ. Who corrupted EFCC more than OBJ? In most cases, governors were illegally removed from office. The targeted impeachment/removal of some governors including Joshua Dariye of Plateau state, Ayodele Fayose in Ekiti state and Diepreye Solomon Peter Alamieyeseigha in Bayelsa state in suspicious manners remains fresh in the minds of Nigerians. These governors were forcefully evicted from their offices using coercion and unconstitutional means.

The NAPEP programme that he introduced to fight poverty became a conduit for the siphoning of budgetary allocations. It left Nigerians poorer, contributing significantly to the growing number of out of school children. What Nigerians expected was that he should have utilized the National Directorate of Employment (NDE) and its programmes to achieve his goal. Rather, he created his own outfits and used same as conduits to amass wealth.

Yet his government recorded a stable price of oil sale. He masquerades as a farmer but failed to develop the Agric sector to achieve the most talked about diversification, hence our continued dependence on oil. His major pre-occupation in this regard was pumping funds to stabilise his personal farm in Ota, as well as building a library in his name using donations from public office holders.

Buhari may not be there yet but he has made a meaningful impact in just 4 years despite inheriting insecurity, collapsed the economy, absence of rail and plummeted oil price. Today the story is changing, significant gains have been achieved in the fight against insurgency; the economy is out of recession, railways are coming back gradually with cargoes being transported from the south to north. The fight against corruption is being waged aggressively with leakages being plucked, and a minimum wage upwardly reviewed to address issues relating to workers' welfare.

Today, there is the trader moni scheme to assist small and medium scale enterprises, school feeding programme to attract children to school and N-Power to address poverty.

Above all, Buhari has redefined himself as a true democrat by addressing issues surrounding June 12, a move Obasanjo and successive governments shied away from. Today, Buhari is being celebrated across the country as a true hero of democracy. Of course, Obasanjo wouldn't like him. He attempted to elongate his tenure by colluding with compromised national legislators to illegally amend the constitution, probably to make him life president. He is despotic, vindictive, selfish and unapologetically corrupt.

Obasanjo has been demystified and retired. His pain is that he can no longer install and remove leaders at will. He has been neutralized by the people, who have demonstrated unprecedented love and support for Buhari. Now he wants to hoodwink Nigerians into believing that his administration is not doing well. This is a clear case of unexplainable "beef"

Frank Eze
This email address is being protected from spambots. You need JavaScript enabled to view it.