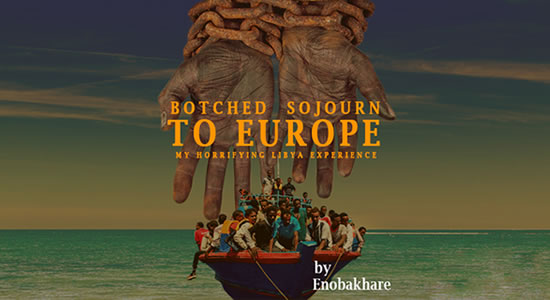 My name is Enobakhare. My botched perilous journey to Europe through Libya started in 2015, two years after I graduated from University of Benin where I studied Philosophy. After my NYSC, I returned to Benin. Following non-availability of white collar jobs, I opened a barbing salon around Ring Road. On the average, I was making between N3,000 and N5,000 daily.

The Journey into slavery, torture and life of excruciating pain started in 2015 when I met David Osas, one of my friends in the University. Osas claimed he had 3 brothers in Italy and Spain and had already succeeded in sending over 15 persons to Europe by road, using the instrumentality of agents in Niger Republic and Libya. His story was so real and rosy that I immediately decided to exploit his connection and travel abroad. He said it would cost me between N1.5million and N2 million to get to Italy.

Osas had told me that I would be taken to Niger Republic where a van was already stationed to take us to Tripoli. He explained that in Tripoli, the agent would handle the responsibility of conveying us to Italy via the Mediterranean Sea. He added that the agent whom he introduced merely as Idris has huge connections in Italy that could even arrange a one year paper and a menial job for me upon arrival in Italy. When I raised concern about reports of people drowning in the Mediterranean Sea, he said the money I was going to pay would give me the best treatment stressing that those who failed to pay the required fee were the ones that packed themselves into a small fishing boat without life jacket or escort.

His assurances gave me hope. I gathered all the monies I had saved over a few years. Money I had wanted to use in marrying my long term girlfriend. I paid him N1 million with the promise of making it up after getting to my destination.

We left Nigeria on April 30, 2015, through Niger. We were 18 in number. Osas put us in a vehicle with the guarantee that his agents in Niger would takeover. The journey through the roasting heat of the Sahara desert made me regret embarking on the trip. Little did I know that the worst was yet to come?

After departing Agadez in Niger Republic, one girl named Cecilia died because of thirst. Urine became the only available source of water. And because we were already dehydrated, the urine was not forth coming. Most villages we entered treated us with disdain and could not even give us water.

When we got to the outskirts of Tajarhi; a crossroad village in the Murzuq district of Libya, three people were shot dead by armed robbers after they refused to part with the little money they were carrying. The robbers ransacked our bags and went away with all valuables including wrist watches and clothes that were beautiful. The three dead bodies were left in the desert and only God knows what happened to them. To our surprise, the driver was not touched. It was as if the driver arranged for us to be robbed. Our phones were also taken, so there was no way we could even retrieve numbers to call our middleman. We were now at the mercy of the driver.

When we arrived Al-qatrun in Libya, we were intercepted by armed men suspected to be rebels. They took us to a certain camp where we met hundreds of others. The camp had no mattresses, no bed, no water, and no electricity. We were fed only once with a small roll of bread and salt water. Every day, three of the rebels would ask if any of us wanted to call our relatives to facilitate our release. The abductors would speak in English, French and Arabic. After spending few months, I took ill and could no longer survive it. In that camp, I witnessed how girls, as young as 12 were molested, raped and even shot at when they attempt to resist. Men were even sodomized. Both men and women also died of scorpion and snake bites, hunger and thirst. They made mockery of our home countries and called us names. The humiliation and the terror we faced, were simply beyond description. Truly, it was the human face of migrant misery.

Since my situation got worst, I called my brother. They demanded N300,000 to release me and told my brother that since I was already in Libya, if he pays additional N200,000 they could assist me to Tripoli where I would join a ship going to Italy. Distressed about my ordeal, my brother paid the money. I was released, albeit into another phase of suffering.

On our way to Tripoli, we were again intercepted by another group of bandits and taken to another camp where over 900 other illegal migrants were camped. At this camp, a merchant-like transaction took place every morning. Money exchanged hands and moments later, some of our colleagues would go missing. We consoled ourselves that the people were paying to take them to Europe little did we know that we were being sold as slaves and sex objects. Gays were also buying us for sexual satisfaction.

This continued until a Chadian that I met there called his people and secured our release. I was dead in the spirit. I could no longer return to Nigeria because of the fear of being caught and taken back to the first camp. I didn't even have the money. So we journeyed to Tripoli and thought our pain would now abate. After my new friend paid the fee for our small boat, we were billed to set out in the night. The small fishing boat that was provided was meant for about eight people. But over forty people were loaded into it without life jacket.

Two hours into the journey, the boat would no longer sail because of the waves. The sea was angry and the weight could not allow the guy manipulate well. It capsized. Only five of us were rescued by the coast guards. Unfortunately, I lost my friend. We were taken to illegal migrant camp where another round of gory experience started in the hands of law enforcement officers. Here, we were tortured with wires, made to do hard labour like prisoners without food and water. I met Jude, an Igbo man at this camp. Jude had told me how they were shot at by coast guard off the tiny rocky island of Lobos, around Lanzarote or so. That while trying to escape, their boat capsized and hundreds of people drowned while the guards ran away. He said he was rescued along with 14 others by fishermen before they were taken to the camp.

I thank God that I am back home. Whoever made President Buhari to intervene and bring us back, God will bless the person. As I speak with you, thousands of Nigerians are still in these detention camps, suffering and dying. None of us wished we embarked on the journey. My barbing saloon would have been bigger by now. We must appreciate what we have.

The Government of Edo has offered to give us stipends monthly and assured that we will be captured in the Federal Government N-POWER initiative. It is a good development. The agricultural policy of the government is also a veritable ground for us returnees to venture into.

My advice to Nigerians is that they should NOT contemplate any illegal migration to Europe especially, travelling by road. It is a journey of agony, slavery, torture, torment, hunger, abuse and death.