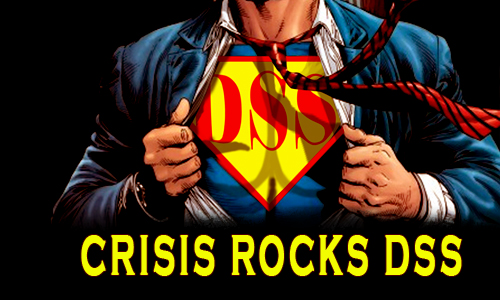 It beats my imagination how some individuals and, more surprising, media outfits jump at fleeting items of information and try to make a mountain out of a molehill of them. No thanks to the social media that have created space for all comers who now feed on the gullibility of some readers who might not be patient or lack the skill to read in-between the lines. Let it be known that reading in itself is one of the specialized set of language skills amongst others such as writing, speaking, and listening.

The above publication, dated 23rd November 2020, leaves no one in doubt that the Publisher, Pointblanknews.com, only played to the gallery. The report 'reeks' of mischief and ostensibly an attempt to please some vested interests whose myopic interests are at variance with the Secret Service High Command. I particularly find it difficult to place side by side the recent #EndSARS protest and any rift (If any) within the Management of the Department of State Services (DSS). If truly some of the lieutenants of the Director-General of the Secret Service are aggrieved, how does that affect the efficiency of the operatives deployed across the State Commands of the DSS?

Still, on the #EndSARS, I wonder what the online Publisher expected the Federal Government to have done with any intelligence given to it before the protest. Could the Federal Government have suppressed the protest that started peacefully in line with the tenets of democracy? With all relevant and available intelligence, could this have been done without cries from both local and foreign bodies? The hijack of the protest by the hoodlums was a fallout of a process whose initiation could never have been prevented. The point here is that intelligence is not procured to suppress peaceful protests as allowed by democracy and when such degenerate to violence, the only option left is reactionary.

Furthermore, Nigerians should not be quick to forget the timely intervention of the Secret Service when it arrested the convener of the #RevolutionNow protest on 3rd August 2019 in a hotel in Lagos. Suppressing that protest did the country a lot of good which many may have failed to acknowledge. Still, many Nigerians condemned his arrest and called for his release from detention. Among them were Professor Wole Soyinka, Femi Falana (SAN), Dr Oby Ezekwesili, and Alhaji Atiku Abubakar. Now, the clueless online medium, Pointblanknews.com, cries foul of lack of intelligence prior to a peaceful #EndSARS protest which was later hijacked by miscreants. Do miscreants hold meetings before hijacking a protest?

As an online columnist, on 13th September 2018, when President Muhammadu Buhari appointed Mr Yusuf Bichi as the Director-General State Services (DGSS), I took time out to surf for information about the man. From what I gathered, Bichi's credentials as a career officer in the DSS were equal to none of his contemporaries in the Secret Service at the time of his retirement. His experience as a National Director across virtually all the Agency's Directorates in Abuja, Director across State Commands and Training Institutions was awful. These are aside from his vast knowledge and skills in intelligence analysis, training in intelligence processing in the United Kingdom (UK), and strategic training at the National Defence College, Abuja. If Bichi paraded unequalled credentials at the time of his retirement before appointment as the DGSS, how can he now be intimidated by the credentials of his juniors as claimed by Pointblanknews.com?

From what I authoritatively gathered after the publication by Pointblanknews.com, the Secret Service, like its counterparts across the globe, does not strictly deploy its operatives including high-ranking ones based on their ranks. The Agency's deployments are based on the capability of the personnel to get the desired results. This is unlike other security agencies like the Police where a Superintendent (SP) or Chief Superintendent (CSP) is deployed as a Divisional Police Officer (DPO), Deputy Commissioner (DCP) or Assistant Commissioner (ACP) as Area Commander, Commissioner (CP) as State Commissioner of Police and Assistant Inspector-General (AIG) as Zonal Commander.

Conclusively and without any prejudice, for any report to be published, I strongly believe that one should be conscientious enough to respect all the principles and code of conduct involved in the practice of journalism which remains the fourth estate of the realm. Presenting facts with all sense of objectivity is the hallmark of journalism which all journalists should have a moral obligation to abide by. With each of the items of information released into the public domain, the journalist sets the agenda for discourse whose ripple effects no one can foresee.