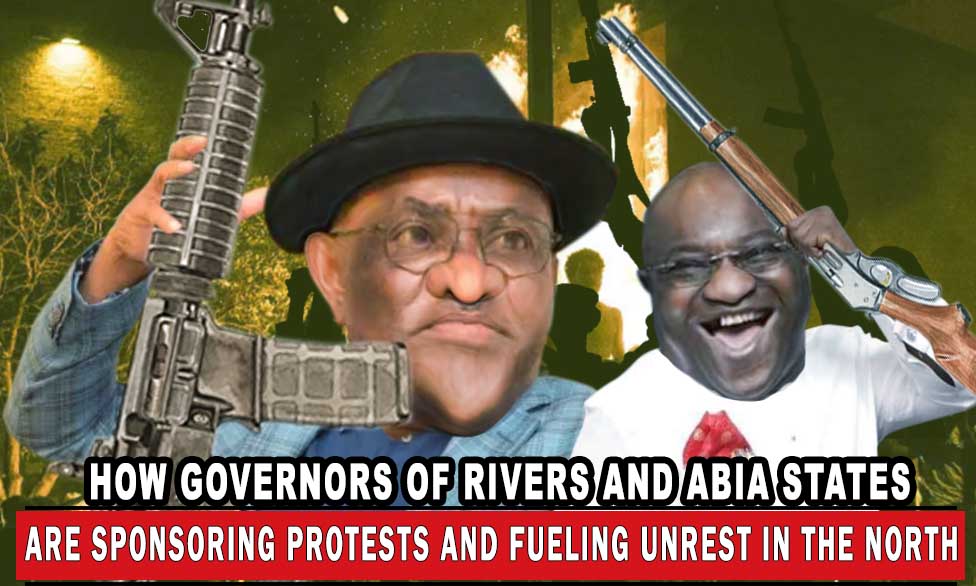 EXCLUSIVE: HOW GOVERNORS OF RIVERS AND ABIA STATES ARE SPONSORING PROTESTS AND FUELLING UNREST IN THE NORTH

Fresh facts have emerged on how the NyesomWike and Okezie Ikpeazu, Governors of Rivers and Abia States respectively are the ones fuelling unrest in the North through forgingan unholy alliance with promoters of Coalition of Northern Groups (CNG) all geared towards undermining the North.CNG is an amalgam of groups which had hitherto comprised of Arewa Citizens Action for Change (ACAC), ArewaStudent Forum (ASF) and Northern Elders Forum (NEF). CNG is naturally aligned to be a pro-government group but has recently been holding and organizing anti-government protest within the North-western region of the federation.

According to investigative findings, the plot was hatched by NasturaAshirSherif who conscripted Abdul-Azeez Suleiman and other willing foot soldiers from Kano, Kaduna and Katsina states to give the plot the needed bite to succeed.

It was revealed that the objective unholy alliance was to ensure that the CNG assume the face of the slander and campaign of calumny against the north while the real promoters are at the background monitoring events as they unfold. Expectedly, they have now latched onto the recent abduction of schoolboys from the Government Science Secondary School (GSSS), Kankara, Katsina State, to launch a BringBackOurBoys campaign, TsareArewa (Hausa for Secure North) and end insecurity in the north campaigns. I believe with the concerted efforts security forces are coordinating amongst themselves, the abducted boys will be freed.

Accordingly to a highly placed source, “I can tell you that lots of monies exchanged hands. The exact figure I can’t quote, but it runs into hundreds of millions of naira and traceable to Wike and Ikpeazu. Some key leaders and opinion moulders in the north mostly resident in Kaduna and Kano States have been paid handsomely from the pool of funds, and they are equally meant to recruit willing collaborators across the nineteen northern states in the plot to discredit the region.

Coordinators of CNG in the nineteen northern states mainly appointed from the opposition Peoples Democratic Party (PDP). CNG has clearly become an appendage of the opposition party and using the current security situation as a bargaining chip for 2030.

Another source who pleaded anonymity stated that some of those recruited from CNG are design programmes to keep their demands in the forefront of public discourse. They are to also hold protests, symposiums, conferences and issue communiques disparaging the current administration while casting aspersions on the person of President Muhammadu Buhari.

“If you have observed that in the past months, especially during and after the EndSARS protest across the country. The north did not yield to pressure to join the protests as the issues did not resonate with their reality. So the went back to re-strategise to have the buy-in of the north since the region is plagued with insecurity challenges like banditry, kidnapping, insurgency and the likes. I can confirm to you that the arrowhead of the group is a respected Nigerian technocrat and spokesperson for NEF who worked with the erstwhile leader of the senate, that is why he features prominently in the media making weighty accusations on the President’s perceived neglect of the north most which does not tally with the reality on the ground” the source revealed.

It was also learnt, that the money was handed to the group under the guise of support the objectives and mandate of the northern pressure group.  Unbeknownst to the governors, their financial support is invariably fuelling protests and civil disturbance in the north. The objective of the group has been hijacked by opposition political elements bent on heating the polity and exacerbating the already tensed security atmosphere in the north.

The writer of this piece noted that he is using this medium, to enjoin the governor of Abia State, Ikpeazu to sit this one out even as he should focus on governance in his infrastructural deficit state, improving the deplorable condition of roads, market, addressing the issue with non-existent public utilities and hapless leadership he provides thus far. As a closet supporter of the proscribed IPOB has continued to give his tacit approval to IPOB to operate freely in his state.  A duplicitous character that has no respect for his people – shamelessly sharing Kerosene as a dividend of democracy. Instead of removing the speck in the eyes of others, remove the log in your own eyes Mr Ikpeazu. GovernorsNyesomWikeand his counterpart in Abiashould tread cautiously as this unpatriotic path they have chosen will not bid the country well. On its part, the CNG must be dissuaded themselves from the current destructive path and resist inciting unnecessary negative reactions from the general public.