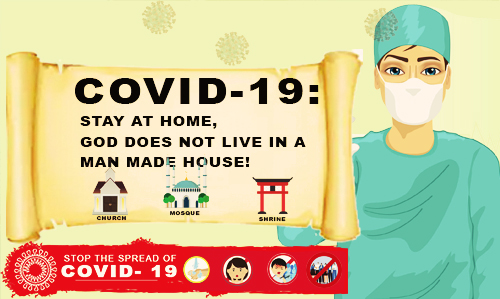 COVID-19: Stay At Home, God Does Not Live In A Man Made House!

In Nigeria, the country has recorded forty-two cases (42) as of Tuesday, 24th March 2020. So far the government has taken measures to contain the spread of the disease including a ban on an international flight from worse hit countries, close down of schools, stay at home order for a section of the civil service and ban on public gathering exceeding fifty (50) persons.

The ban on public gathering has attracted reactions, especially from some religious groups. Some pastors and Imams objected to the ban even to the point of holding prayers and church services in defiance to the order. Nigeria is a very religious country and many citizens take the words of the spiritual leaders very seriously. This is why these men most not out the lives of their congregation at risk.

The ban on public gathering and closure of places of worship is not peculiar to Nigeria. So far, all major international and local sporting events have been cancelled including the European Football Championships and the Olympics which have been postponed to 2021.

Furthermore, in Italy, the Vatican had to close down all churches and stopped mass in response to the COVID-19. Similarly, despite not recording any known case, the Saudi Authority had to shut down its airspace, cancelled Umrah and other religious visits to the Holy sites and encouraged its citizens to stay at home as a proactive prevention measure.

Islam forbade anyone who eats garlic or from going to the Mosque because the smell would be a source of irritation to others. It is, therefore, safe to say that anyone carrying a deadly disease as the coronavirus would do well to stay away from the congregation. Similarly, biblical accounts clearly show that persons with the communicable disease were banned from mixing up with the public. This is why lepers were isolated from the community.

Furthermore, in Isaiah 26:20, the people were encouraged to “go, my people, enter your rooms and shut the doors behind you; hide yourselves for a little while until his wrath has passed by.” This clearly demonstrates that in a desperate situation, isolation is advised.

Beyond the issue of containing the disease is the matter of obedience to constituted authority.  The Quranicenjoins thus: “O you who believe, obey Allah and the Messenger, and those in authority among you” (Qur’an 4:59).The bible says: Let everyone be subject to the governing authorities, for there is no authority except that which God has established. The authorities that exist have been established by God.Consequently, whoever rebels against the authority is rebelling against what God has instituted, and those who do so will bring judgment on themselves (Rom. 13:1-2).

Like we say in the Nigerian parlance, you can’t be more Catholic than the Pope or more Muslim than the Sultan. God does not live in a house built by men. God lives in our heart and is expressed best when we show love to one another. We must be wise at this time. As we have already seen, the coronavirus is no respecter of person and as such, the best weapon against it must be social distance by avoiding large gathering.