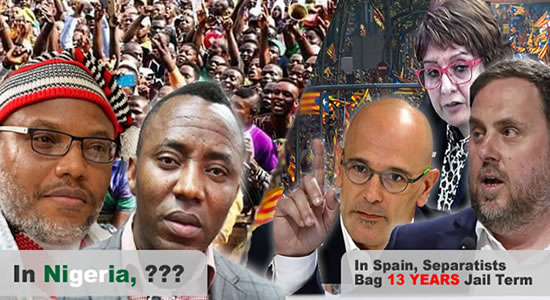 On Monday, the Spanish Supreme Court jailed nine Catalan separatist leaders over their roles in the failed bid for secession about two years ago. While Catalonia’s former vice-president Oriol Junqueras was convicted of sedition and misuse of public funds and sentenced to 13 years in prison, former Catalan foreign minister Raül Romeva, labour minister Dolors Bassa and regional government spokesman Jordi Turull were each convicted of the same offences and sentenced to 12 years’ imprisonment and handed 12-year bans on holding office.

One of the offences that all the convicts were accused of is sedition. Sedition means conduct or speech inciting people to rebel against authorities or monarch.

Sadly, the lawful arrest of individuals in Nigeria whose comments and actions have threatened national security have been widely condemned by elements that pretend to love the country. These elements who have politicized everything government does, have continued to turn the Nigerian law upside down, vilified government officials, conspired with foreign hostile elements to further acts inimical to peaceful co-existence.

In Nigeria, Nnamdi Kanu, after a failed call for a referendum established a military arm for his Independent People of Biafra (IPOB) group with the intent of violently facilitating the breakaway of his purported imaginary "Biafra". Before his IPOB went on full scale operation, Kanu had solicited funds from Ndigbos in Diaspora for the purchase of arms and ammunition. Video evidence still flood the media. His IPOB loyalists had also confronted military operatives with petrol bombs, machetes, missiles and other weapons.

Using a different tactics, Omoyele Sowore, a presidential candidate in the last election who lost woefully to another candidate, in his desperate bid to grab power by all means also resorted to preachments of violence in the guise of "#RevolutionNow" protest. He had even vowed to cause the cessation of Nigeria's secret police (DSS) after his botched August 5 planned revolution. Apparently, Sowore who had earlier met with Nnamdi Kanu in New York was covertly working with some hostile elements to truncate the nation's democracy and enthrone anarchy.

Nigerians must remember to put the nation above every other primordial interest. We must know that the only country we can proudly call our own is Nigeria. Those seeking to divide us or succumb to entreaties by foreign hostile elements to cause hostilities must realize that the nation's collective resolve cannot be broken.

The decision by Spanish authorities to prosecute Catalan separatists leading to the various jail terms should be an eye opener to Government officials in Nigeria. They should pursue current cases involving Nnamdi KANU and Omoyele Sowore to a logical conclusion. Successful prosecution of the two agitators will no doubt present the Nigerian state as a serious country willing and ready to prosecute those trying to undermine our resolve to forge a united and virile nation.