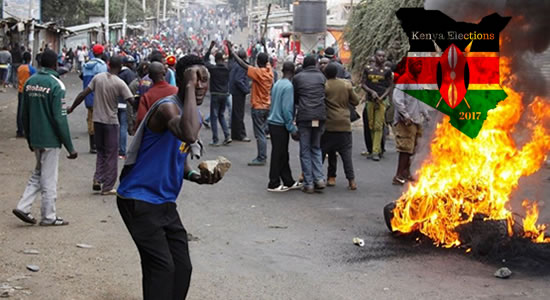 The violent post-election protest that greeted the recently concluded Kenya's presidential election has claimed 24 lives nationwide according to a rights group known as Kenya National Commission on Human Rights. It would be recalled that Uhuru Kenyatta was declared the winner of the poll on Friday after defeating opposition leader Raila Odinga for a second five-year term. Kenyatta reportedly secured about 54% of the votes while his rival received a total of 45% votes.

Following the declaration of the election result, supporters of the Odinga rejected the results describing the exercise as rigged. The aggrieved supporters consequently resorted to widespread violent protest in and around Kisumu and Nairobi's slum of Mathare. Apart from those killed in the violence, the Kenyan Red Cross disclosed that it had treated 93 persons who sustained various degrees of injuries from attacks.

Meanwhile, Amnesty International has called on the government to urgently launch investigation into the alleged killing of innocent demonstrators in opposition strongholds. It made the call in a statement released on Sunday. The statement which was signed by the Regional Director of the Organization, Muthoni Wanyeki noted that "everyone has a right to peaceful protest and they must not be hurt, injured or killed for exercising that right."

The President-elect has called on Kenyans to exercise restraint.