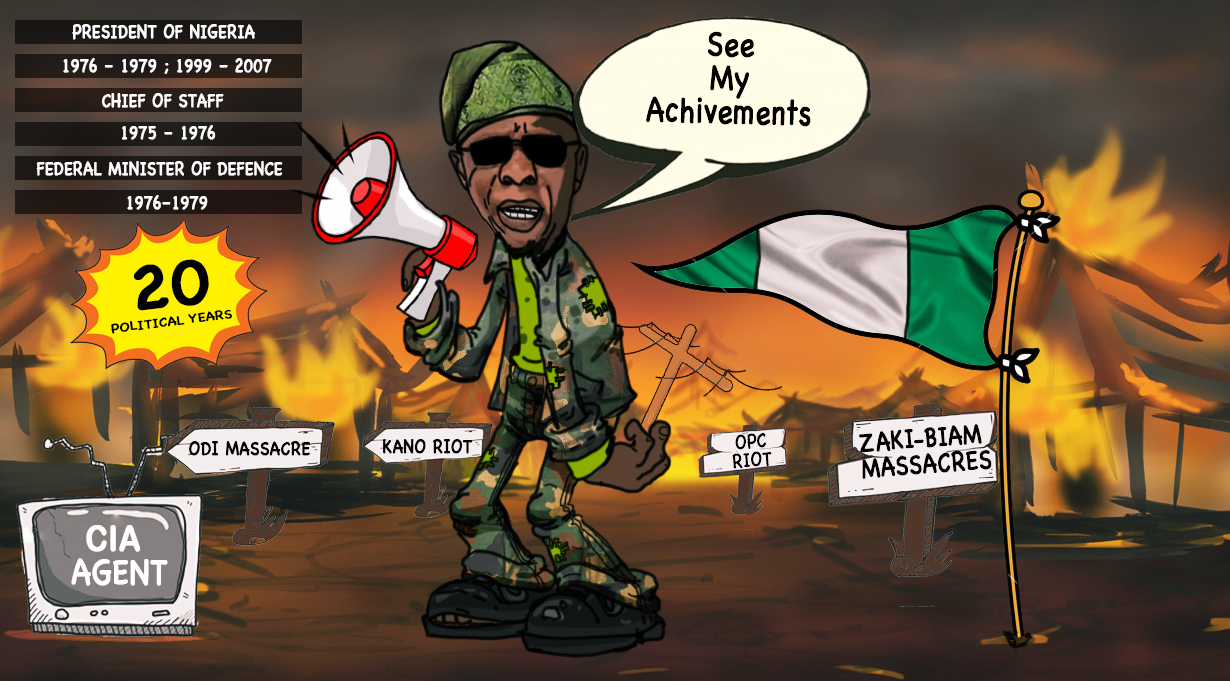 The recent christening of Former President OlusegunObasanjo as the Divider-in-chief by a presidential aide to President Mohammadu Buhari isapt and not very far from the truth. This development was in response to OBJ's controversial comment that the country was drifting into a failed and badly divided Nation-State under the present administration.

This development is rather needless and laughable, especially when it is coming from the person of OBJ, who instead of developing the country as a Military Head of State and later as a democratic President holds the record for impunity and mismanaging the country's huge resources. Now that the chickens have come home to roost OBJ is crying wolf in his characteristic manner.

As a former President, a lot is expected from OBJ rather than his fantasy for cheap propaganda against those who succeeded him. It is evident that his administration despite the availability of huge economic resources has little or nothing to show for, especially as corruption and looting of public funds thrived under his watch and glaring insecurity occasioned by the activities of Egbesu and Bakassi Boys, OPC, MASSOB, and MEND among other groups which were the order of the day.

Globally, it is common to see past Presidents and Head of States often take the back seat and assist successive administrations by giving advice and proffering solutions to issues based on experiences garnered by them while in the office all in the interest of their nations where they are referred to as elder statesmen. This statesmanlike character does not seem to be the case of ex-president Obasanjowho takes up every opportunity to ridicule every successive administration especially the President Muhammadu Buhari's'.As a matter of fact, Obasanjo has written unconstructive open letters to all successive administration in the country. Little wonder his messianic arrogance has led to believe he is the only leader fit to rule the country so much that he brazenly pursued the infamous Third Term Agenda. Suffice to note this administration’s policiesare primarily geared towards righting most of his wrongs when he was at the helm.

OBJ's criticisms many times raise questions as to whether it comes from an objective mindor maliciously driven going by the fact that he led Nigeria for a total period of 11 years both as Head of State and democratically elected President. Undoubtedly, this means he should have good knowledge of governance in-country and contribute to its growth and development, as well as it woes. But the reverse is the case as he has the senility to forget that he was once in the helm of affairs when the country had its share of challenges but he chooses to peddle propaganda just to distract a president who unlike him is making giant strides in the country.

It is no secret that Obasanjo's accusations of Buhari's failures are the exact failures he recorded while being president. His failure to address ethnoreligious relations which had plagued our chequered history as a country since 1966 and other centrifugal forces attempting to fight against the indivisibility of the country.

In addition, to the challenge of endemic corruption recorded in core sectors of the economy under OBJ's administration is unparalleled in the Nation. The inferior privatizations of public institutions like the then National Electric Power Authority, NEPA and the mismanagement of $16 billion expenditure on power project remain unanswered. This is aside from another staple looting of public funds like the N950 billion non-existent road constructions and his failed bid for the third term which ranked Nigeria among the most corrupt countries with lack of infrastructural development and over 50% decline in employment rates among others.

Undoubtedly, Obasanjoestablished institutions like EFCC but used the commissionas a tool to harass perceived political opponents and enemies which made his administration notorious in breaching basic fundamental human rights of Nigerians. OBJ with his foible should not be pointing out that of others.