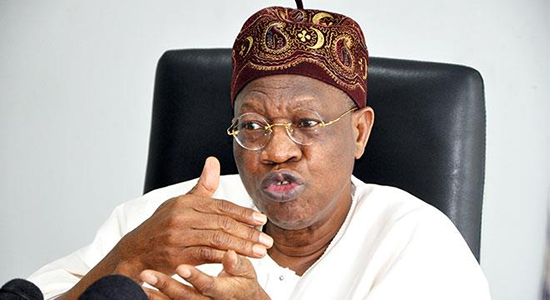 The federal government said on Friday that despite the fake news and disinformation on social media-fuelled the recent #EndSARS crises, it would not shut down the internet or stifle press freedom. Minister of Information and Culture, Alhaji Lai Mohammed while speaking with newsmen in Lagos reiterated that the government would not sit down and allow “a reckless use of social media to aggravate our fault lines and throw the country into turmoil.”

“But in curbing the excesses of social media, rest assured, gentlemen, that we will neither shut down the internet nor stifle press freedom or free speech, as some have insinuated. We also acknowledged that social media is here to stay,” he added.
Mohammed said, “The issue of how fake news and disinformation aggravated the EndSARS crisis has dominated our previous meetings with various stakeholders.

The Minister also decried that less attention was paid to the “barbaric and gruesome murder of security agents by hoodlums” during the recent #EndSARS protest, saying security agents were treated as “sub-humans.”

He said, “While everyone was fixated on the fake massacre at Lekki Toll Gate, few paid attention to the way and manner policemen and soldiers were killed.

“In particular, policemen were hacked down in the most gruesome manner that calls into question the sanity of their killers.”

He further lamented that all human rights organizations “ignored the fact that six soldiers and 37 policemen were killed, some of them dismembered and cannibalized.”

“The media report of the killings was perfunctory, at best,” he said, warning that Nigerians should resist the temptation of tarring all the security agents with the same brush.

“Now, this is hunting all of us. Wittingly or unwittingly, we have succeeded in scaring policemen off their beats. Today, many of them are even afraid to wear their uniform. And the result has not been pleasant, in terms of security of life and property,” he said.

According to him, every Nigerian owes it a duty to “empathize with and appreciate our security agents.”

The Minister said, “No life is more important than the other, and respect for human rights should not be selective. I want to commend the state governments that have taken bold steps to shore up the morale of the police. While at it, I want to remind all of us of the saying that a society that makes war against its police had better learned to make friends with its criminals.

“For the record, six soldiers and 37 policemen were killed all over the country during the crisis. Also, 196 policemen were injured; 164 police vehicles were destroyed and 134 police stations burnt down.”