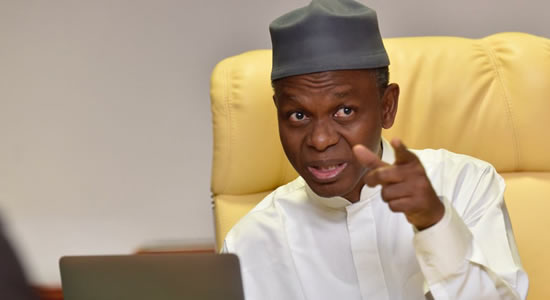 The Kaduna State Governor, Mallam Nasir El-Rufa’i has declared that medical Doctors and Health workers threatening to embark on industrial action should rescind their decision or take the risk of losing their job.

The state government made this statement through its special Adviser on Communication, Muyiwa Adekeye, saying the state would not tolerate blackmail from health workers any longer promising to keep the health facility running within the state and will protect those who are willing to work.

The governor while responding to the strike notice letter served to him by health workers, said “it is criminal” to declare strike amidst the coronavirus pandemic.

He said the state government cannot be cowed by the threat of strike action from health workers to exempt them from the 25% salary cut that would be used to provide palliative to the most vulnerable that were hit by the lockdown order.

In his statement, ‘the Government reject the strike threat and would regard persons who fail to show up for duty of having forfeited their employment. Every Health Worker that is willing to work is required to sign the register at the Ministry of Health and the Health Institutions to which they are deployed.

He added ‘the Ministry has a mandate of the Government to ensure that resident of Kaduna state is deprived of Public Health services.

According to El-Rufa’i, his government would make every effort to ensure health facilities are not grounded during this trying time, willing workers would be guaranteed free and safe access to the facilities while those who are not willing to work are advised to stay away from this criminal attitude of planning to impede.