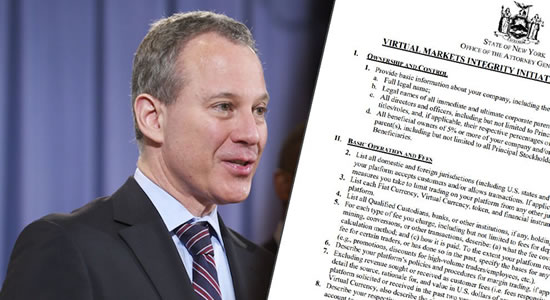 New York Attorney General Eric Schneiderman launched an investigation into bitcoin exchanges today, his office announced. He’s looking into thirteen major exchanges, including Coinbase, Gemini Trust, and Bitfinex, requesting information on their operations and what measures they have in place to protect consumers, the Verge reports.

“Too often, consumers don’t have the basic facts they need to assess the fairness, integrity, and security of these trading platforms,” Schneiderman said in a statement.

His office sent detailed questionnaires to the thirteen exchanges, asking them to disclose who owns and controls them, and how their basic operation and transaction fees work.

The questionnaire also asks for specific details on how exchanges might suspend trading or delay orders, indicating Schneiderman is particularly concerned with exchanges manipulating the timing of public orders.

The investigation will attempt to shed more transparency on how platforms combat market manipulation attempts and suspicious trading, as well as bots, theft, and fraud.

Many of the exchanges Schneiderman is targeting, such as Beijing-based Huobi, have headquarters located outside the US, but the attorney general has jurisdiction over any foreign business operating in New York.

Exchanges have been subject to plenty of glitches, robberies, and more. In February, some Coinbase users noted that they were getting double charged for legitimate transactions and their accounts were being emptied, which resulted in overdraft fees.

Mt. Gox, an exchange in Japan, infamously had all of its bitcoin slowly drained out of its accounts by a hacker and had to file for bankruptcy in February 2014 as a result.

Regulators are tightening up on cryptocurrency policies and updating old literature on the issue.

Congress has held a hearing with Coinbase and think tank Coin Center to gain more of an understanding of the topic, and the SEC issued subpoenas to cryptocurrency companies and individuals in February.

Coin Center’s director of research Peter Van Valkenburgh told The Verge that the new investigation would fit into a number of existing rules regulating bitcoin exchanges. “Far from being unregulated,” he says, “these businesses must contend with state money transmission licensing laws, federal anti-money laundering law, CFTC scrutiny for commodities spot market manipulation, SEC scrutiny for securities trading (should any tokens traded be securities), and in this case, state consumer protection investigations from the several attorneys general.”