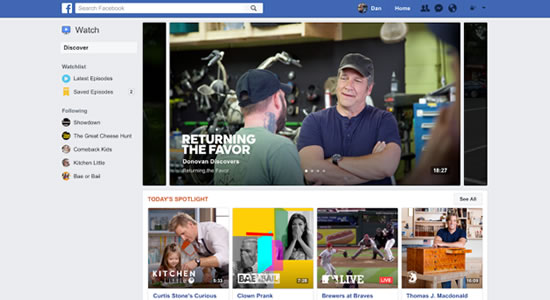 Social media giant Facebook has made introduce a new video feature called Watch, which lets users discover videos from outside their feed more easily and will also dabble in original content. The new offering comes after months of speculation about the service and on facebook’s plans to revamp its video offering, putting it against YouTube and Netflix. Facebook has about 2 billion monthly users.

The service is presently being tested with a handful of users in the United States and will gradually roll out nationwide. Facebook is funding some shows and inviting independent creators to sign up to the platform on their own as well; once they’re in, they’ll get a Show Page (similar to Pages for brands) that fans can follow and find clips on.

For viewers, Facebook has included a watchlist that lets you save episodes to catch later; you’ll also be able to discover videos based on how people interact with them, in sections like “Most Talked About,” “What’s Making People Laugh,” (which includes shows where people have hit the “Haha” reaction button), and “What Friends Are Watching.”

"Watching a show doesn't have to be passive," said the company's founder Mark Zuckerberg in a Facebook post. It can be a chance to share an experience and bring people together who care about the same things."

The world's largest social network added a video tab last year, and has hinted for some time that it might make the move to producing original content. Watch could open up new revenue potential for both Facebook and programme makers, while users can expect to see targeted advertising before and during the shows.

Facebook says it hopes its selection of shows will address both niche and broad interests. It will be interesting to see how the new video feature pans out over the coming months and how the internet giant adapts its approach globally.