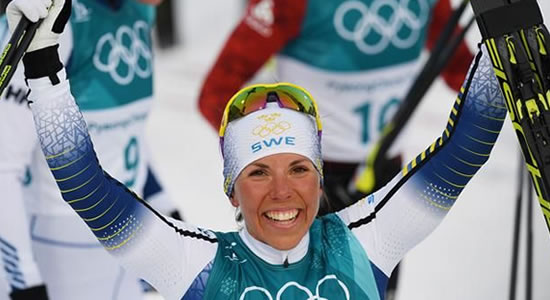 Charlotte Kalla of Sweden celebrates after winning the women’s 15km skiathlon in PyeongChang, South Korea on Saturday. Just hours after the Opening Ceremony at the 2018 Winter Olympics in PyeongChang, South Korea, a gold medal has already been awarded. Sweden’s Charlotte Kalla pulled ahead late to win gold in the women’s 15km skiathlon on Saturday with a time of 40:44.9.

Finland’s Krista Parmakoski won the bronze medal with a time of 40:55.0.

The 15km skiathlon forces skiers to use both the classical technique and the freestyle technique, going 7.5km with each technique. It’s often considered one of the more brutal, difficult cross-country skiing events.