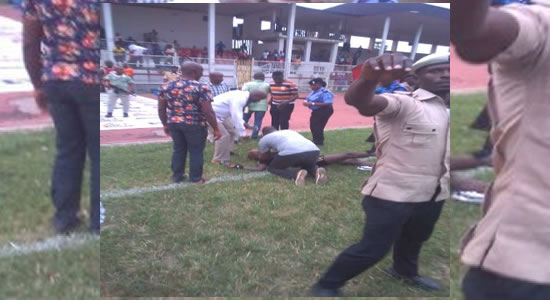 Heartland has defended the action of their fans who attacked centre referee, Yusuf Garba, following their 1-1 home draw against Plateau United in a Nigeria Professional Football League (NPFL) matchday 18 tie on Monday.

Garba was severely injured after he was attacked by the home supporters at the end of the game played at the Dan Anyiam Stadium, Owerri.

According to a statement released by media officer of Heartland, Henry Echefu Naze the referee incited the fans through his questionable calls in the game.

“Dear friends and folks the management of Heartland Football Club Owerri after a critical analysis of the events that preceded their matchday 18 clash against visiting plateau United, wants to state as follows.

“That a delightful game that interested all the fans that loved watching good football was marred by the attitude of the center refree Mr Yusuf Garba from Kano state, truly speaking the facts remains that Mr Yusuf Garba marred the game right from the on-set, it was obvious that he already had a premeditated motive to favour the away team which was seen in the several questionable calls he made after the second half of the game which gave room for suspension.

“This was what sincerely affected the interesting game except you think otherwise.

“At the end of 90 minutes if you watched closely you would have seen the fourth official signalling him Mr Garba for additional time but he intentionally ignored him to allow about 4 minutes before adding 4minutes extra time even.

“When the extra four minutes ended the match Commissioner Mr Roland Abu called his attention to end the game as the time was up and following his questionable calls to save the already heated up atmosphere but he responded nothing is happening.

“To the surprise of everyone, a throw-in ensued and taken by Plateau United but one of their striker was holding Heartland goal keeper Ebele Obi to prevent him from catching the ball which the second assistant refree signalled for an infringement but still Mr Yusuf Garba ignored him.

“All these activities of Mr Garba seriously marred the game and proved he had interest in the match which I think was what must have informed the decision of the fans to angrily rush towards him immediately after the game but for the quick intervention of the men of the Nigerian Police it would have been another story of an unending tales.

“Thank God for the quick intervention of the police who stood firm to rescue him, surprisingly the police discovered on the referee Mr Garba items around his waist and under his stockings which are not part of the refereeing equipment, but
be it as it may it is important that Nigerian referees help this country’s league to grow and produce better teams that will fly the nation’s flag in the continent and represent us well in future CAF club competitions, such will help our teams get pass the group stage.

“The LMC, the NFF and all football stakeholders should do the needful and faster too to save this country’s league from disrepute.”
CompleteSports