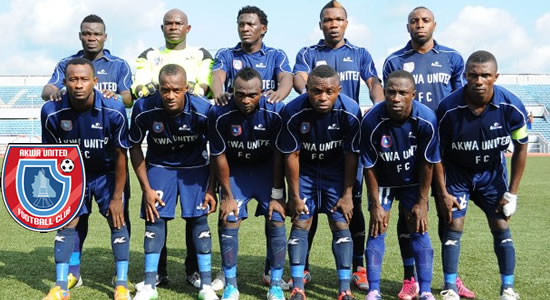 Akwa United kept their hopes of finishing in top three of the Nigeria Professional Football League this season alive following their 2-1 win against Lobi Stars in the first game of matchday 36 at the Uyo Township Stadium on Friday. Musa Newman and Gabriel Okechukwu scored to put Akwa United 2-0 up before CHAN Eagles star Kingsley Eduwo got a goal back for Lobi.

The defeat means Lobi have now lost their eight straight away games to Akwa United.

Akwa maintains their third position on 57 points, five adrift of leaders Plateau United who have 62 points in the league table. Lobi remains ninth on 50 points on the log. Newman gave Akwa United the lead in the 20th minute, heading in Ifeanyi Ifeanyi’s corner.

Ifeanyi almost doubled Akwa’s lead on 29 minutes but his well-taken free-kick curled just away from the target. A minute later Newman had a chance to grab his second goal of the game only to see his effort come off the bar.

NPFL second top scorer Anthony Okpotu should have scored for Lobi after he was put through on goal by Uchenna Eze but could not find the back of the net. In the 40th minute, Akwa went 2-0 up thanks to Okechukwu who rounded Lobi’s keeper before tucking the ball into the net.

With just one minute left in the first half, Lobi pulled a goal back through Eduwo off an assist from Okpotu. Akwa almost restored their two-goal lead in the 49th minute but Ubong Friday’s header from Ifeanyi’s corner kick hit the woodwork.

Second half substitute for Akwa, Christian Pyagbara, had a chance to put day light between the two teams in the 73rd minute but scuffed his shot over despite having acres of space. In the 74th minute, it was the turn of Okechukwu to miss a big chance for Akwa after he was through on goal.

And with three minutes left Pyagbara tried an effort from a tight angle but Lobi keeper was alert to the danger. Meanwhile, on Sunday, nine games of matchday 36 will be decided across different centres in the country.

Other Matchday 36 fixtures are: