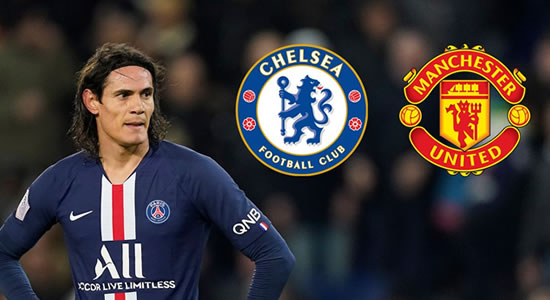 Manchester United and Chelsea may be frustrated in their attempts to sign Edinson Cavani from Paris Saint Germain this January, with the player’s father Luis stating he wants his son to sign for Atletico Madrid.  With Cavani’s contract running down with the Ligue 1 giants this summmer, there are growing questions on where his next move will be. The prolific striker is attracting plenty of interest from a number of clubs in the January transfer window.

Express Sport reports that both United and Chelsea are in the hunt for his signature as they seek to bolster their respective attacks.

But La Liga side Atletico Madrid are also being heavily linked with reports emerging earlier in the January window they had reached a pre-agreement ahead of signing him this summer.

No such deal has been announced, however PSG sporting director Leonardo admitted Cavani has asked to leave the club.

It was stated Atletico had made an approach but their offer was rejected although the club are open to further negotiations with other teams this month.

Cavani’s father though has made it clear which team he would prefer his son to join.

“He wants to leave because he needs to play. I would like him to go to Atletico,” he said on El Chiringuito TV.

Chelsea that appear to be the favorite to land the striker again pu up a disappointing show last night at Stamford Bridge against Arsenal. Although Arsenal played with a man down after David Luiz was dismissed for bringing down Tammy Abraham in the box, the team showed spirit and character by drawing level. The encounter ended 2-2.

Chelsea had lost its last match against Newcastle, with Frank Lampard hinting on the possibility of strengthening his attack this current transfer window.