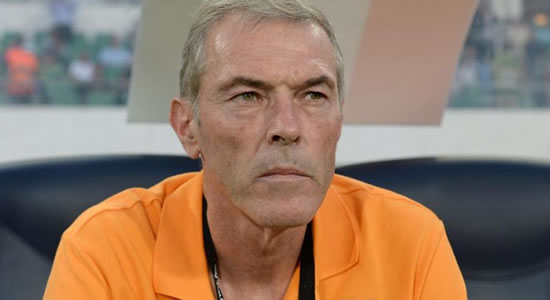 Head Coach of Benin Republic Football Team, Michel Dussuyer has admitted that the Squirrels lost to a superior opposition following their 2-1 defeat to Nigeria in Wednesday’s 2021 Africa Cup of Nations qualifying fixture at the Akwa Ibom International Stadium, Uyo.

The Squirrels took a shocking lead in the second minute when captain of the side, Stephan Sessegnon slotted the ball home after he was set up by Joel Dossou.

The Super Eagles equalized on the stroke of half time with Victor Osimhen converting from the spot after Ola Aina was brought down in the box.

Samuel Kalu then netted the winning goal for Nigeria in the 62nd minute following a brilliant solo effort.

Speaking to reporters shortly after the encounter, Dussuyer said

“We played well in the first half, defended well, Nigeria did not create many opportunities but we conceded a penalty just before the half time which gave more confidence to Nigeria in the second half,”

“The second half was very hard (for us) and we wasted many balls, gave it to Nigeria so many times.

“In the end we tried to recover after conceding and we had an opportunity at the end (which hit the post) but it is logical; there’s a difference between Nigeria and Benin but we have fought for as much as we can.”